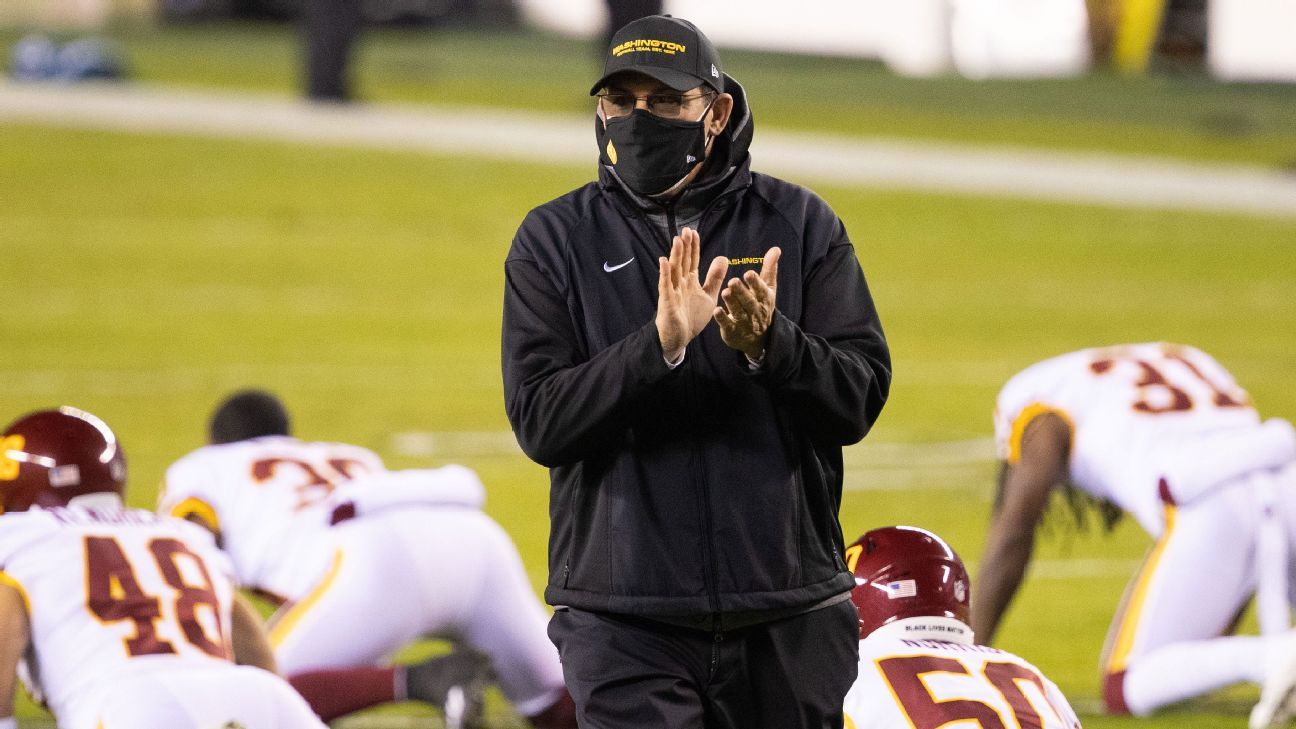 ASHBURN, Va. — The Washington Football Team was 2-7 in November and seemingly headed nowhere, even while playing in the NFC East. A bad team in a terrible division.

Still, Washington professed hope. Coach Ron Rivera maintained they could win the division, a comment that often drew raised eyebrows and snickers — even if it was mathematically accurate.

And then it became obvious: Don’t bet against a team whose coach underwent in-season cancer treatment and whose quarterback, Alex Smith, needed 17 surgeries so he could walk and play again.

They are two big reasons Washington (7-9) won the NFC East and will host the Tampa Bay Buccaneers (11-5) in the wild-card round on Saturday (8:15 p.m. ET, NBC), providing inspiration and a bonding element for a team coming off a chaotic 3-13 season in 2019.

There are other reasons, as well: The addition of No. 2 overall pick Chase Young at defensive end, for example. A scouting staff that helped deliver a young talent base. Assistants who picked up slack while Rivera focused on treatments and was fatigued.

But Rivera’s battle with squamous cell cancer and Smith’s journey to playing again provided fuel for a team that had run on fumes for a few years.

Their stories made Washington easy to cheer for and turned a franchise that had been scorned or ridiculed — because of the previous name, because of its issues off the field — into a more likeable one.

“It has brought us all together,” Washington center Chase Roullier said. “We can’t be together in meetings. We usually go out to eat and do things as a line, as a team, and we haven’t had that. Bonding around something, something difficult as a team that we’ve gone through, has helped.”

It wasn’t always pretty for Washington; it struggled to beat a depleted Philadelphia squad in Week 17 to clinch the division. It lost to Carolina, which entered the game 4-10, the previous week.

Washington consistently fell behind by double digits this season — 11 times, in fact. Of those, they rallied to win twice and five other times had the ball with a chance to win late. In other words, the team was resilient, like its coach.

“He’s a resilient guy,” said assistant defensive backs coach Richard Rodgers, who has been with Rivera since 2012. “That’s what he implements to the team. He calls it ‘building calluses.’ There are some things players don’t like to do all the time, so it’s building calluses in your team. That’s important to him.”

Many players said they watched the ESPN documentary Project 11, about Smith’s recovery from a compound fracture in his right leg suffered in 2018 against the Houston Texans.

Make your picks throughout the playoffs and compete for $30,000! Make Your Picks

They also watched Rivera attend practices while going through treatments that left him so fatigued, he would have to be driven home. It changed the way Rivera wanted to coach, being less hands-on. He would sit in a golf cart during many practices, unable to engage with players because of fatigue and being a cancer patient in a time of COVID-19, which wiped out offseason programs, preseason games and forced meetings to be held via videoconferencing.

“This team didn’t really get to feel him early,” Rodgers said. “But this team, watching him, understood when he said we’re going to have opportunities and we’re going to win and we’ll change the culture, they saw it first-hand because they saw what he’ll go through. He stayed consistent in what he wanted done.”

So did Smith. The team followed.

“It’s helped,” Rivera said, “especially when you see what Alex has gone through and just his desire and drive to get back and the joy and thrill he gets from playing. It’s been very inspirational for me to watch him. I’d like to imagine that, in some way, what I’ve gone through plays a little part in this, as well. You have to be touched by seeing those things. Just trying to be an example is important.”

Players have been around Smith long enough for the fascination with his recovery to diminish. Now, he’s their starting quarterback and leader. In training camp practices, though, Rivera said he would hear players talk about him with a mixture of excitement and reverence. Rivera said he’d hear teammates saying, “He loves the game. That’s why he’s out there.”

“That, to me, is a tangible thing that the guys can learn from,” Rivera said. “If you don’t learn from it, maybe you don’t deserve to be here. This is an opportunity that you’re not just given. You earn it. For him to work his way back, that, to me, tells the whole story.”

Smith is dealing with a strained calf on the same leg of which he broke the fibula and tibia in November 2018. It has impacted his mobility to the point Rivera is considering a quarterback rotation on Saturday. But even in this, Smith’s persistence is noticed by teammates.

Wide receiver Terry McLaurin, who returned after a one-week absence for a high ankle sprain, said he would get treatment every morning at 6 a.m. Smith was there, as well.

“Seeing a guy like that who has been through as much as he has and continues to fight, continues to put himself in position to help this team, I can’t give enough credit for that,” McLaurin said Sunday. “I like to see myself as built the same way. To be out here with Alex and get a win [Sunday], with all we’ve been through as a team and all he’s been through individually, this one’s pretty sweet.”

Smith doesn’t want the focus to be just on his recovery. After all, he has now played in eight games this season, winning five of his six starts after getting his first action of the season in a Week 5 loss against the Rams when starter Kyle Allen was injured. He has reached a point where he’s worried about improving as a player and a team, not his story. He also doesn’t worry about his impact on teammates.

“I don’t pay much attention to that or see it. Certainly, I go about my business and role [model] the best way I can,” he said. “When you step in the huddle or interactions with guys on the sidelines and in the locker room and stuff like that, for me, it’s being authentic. It’s all about being able to go out there and help us win.”

As Rivera regained his strength, he also rediscovered his coaching ways, getting involved in practices. Before protocols forced meetings to be via video conferencing, Rivera would pop into position meetings, hearing, for example, how the offensive linemen are impacted by the quarterback’s protection calls — good or bad.

“One thing I love about Coach Rivera is you see him getting hands-on,” Washington defensive tackle Jonathan Allen said. “It’s important to see the leader of the team and organization be on the field and not just being a guy sitting back and watching.”

Rivera will venture to various groups, offering tips or paying attention to technique.

Access elite coverage for every fan: highlights of the biggest games, original series from NFL legends, unprecedented analysis and more. Sign up now to unlock everything ESPN+ has to offer.

“When your head coach is watching, you take it up another level when he’s around,” Washington linebacker Thomas Davis Sr. said. “Having Coach Rivera out there doing the things he was able to do after treatments were done, guys definitely bought in more, dug down more and paid closer attention to the finer small things of doing things the right way.”

Roullier said he doesn’t recall the date of the first practice when Rivera was able to once more engage during drills. But the change was noticed.

“We’re doing our sled drills that we used to do before every practice and he was excited and down there barking at us a bit to get us going,” Roullier said. “We hadn’t heard that in quite a few weeks. Even though he was barking at us, it was still a good thing for us to hear him back, hear his passion.”

Another time, Rivera met with a front-line player to discuss an issue he had with what he was being asked to do. A source close to the player said Rivera settled the situation. It wasn’t a huge deal, but it’s something Rivera couldn’t do as much of when he was going through treatment.

Smith’s recovery is rarely far from their thoughts.

“He’s been fighting through it so much and doing so well, it’s not something to think about all that often,” Roullier said. “But there’s still a constant reminder. When you look down in the huddle and he walks in with his brace, you get reminded of that. It gives you that perspective of a guy that’s being our leader.”

Though Washington had competitive players with good attitudes before Rivera arrived and Smith returned, the additions of the coach and quarterback to the chemistry have resulted in a tough-minded team.