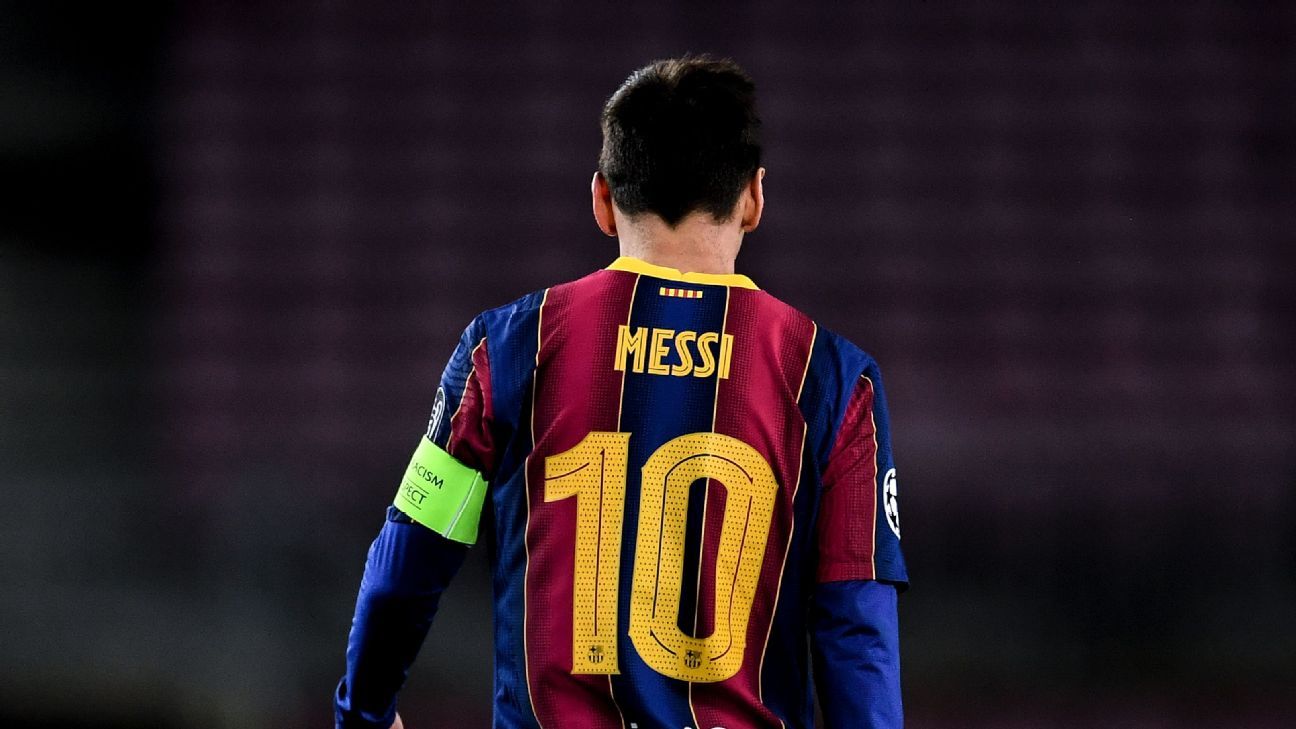 January shapes up as an absolutely colossal month for Barcelona given that: Their greatest-ever player is suddenly free to commit to a rival club for no fee, and they could kiss goodbye to three trophy chances (Supercup, Copa and League) by the time February dawns. Plus, please don’t forget there are Camp Nou presidential elections.

For those outside Catalunya, the political dogfighting, mudslinging and vote-casting are the least likely to set your pulses racing. Lionel Messi choosing to join Paris Saint-Germain? Or Manchester City? And using his contractual liberty to commit to them? Absolute dynamite — the source of a billion news clicks all over the globe.

Barcelona tripping up in the Cup competitions? Or shedding points in their banana-skin run of three straight away Liga matches (against Athletic, newly coached by Marcelino, Elche and Granada) given that they’re already a calamitous 13 points off the top of the table?

Sexy news to those who were sick of the past decade being Blaugrana-dominated. It would also be explosive for Barca fans who dread things getting worse than they are. So, fair enough. I’m not expecting many of you to lean over the garden fence with an incredulous expression and demand of your next-door neighbour: “Did you hear what Jordi Farre (the presidential candidate whose agitating brought down the last board) said about Victor (the candidate whose campaign looks most persuasive) Font’s five-point plan for Barcelona’s economic recovery?”

For that reason it was generous, at the weekend, of Ronald Koeman’s team, and title-chasing Atletico Madrid, to give everyone a couple of brutal reminders of what’s at stake when the Camp Nou presidential polls close on Jan. 24. Viz: Don’t elect another dud.

Did you watch Barcelona winning at basement club Huesca, or Atleti ensuring that they stay top with two games in hand on Real Madrid, their nearest rivals? If not don’t worry. Here’s a handy summary.

Barcelona were terrific for about 60-ish minutes. Then they left themselves confused, error-strewn and, frankly, embarrassed as they ended up urgently demanding of the match official: “How long left?!” Exactly as teams like Huesca are supposed to do when they are hanging on against giants like Barcelona. More on that in a minute.

Atleti bossed Alaves, who’ve already beaten Barcelona and Real Madrid this season, for about for 75 minutes, found themselves sabotaged by an 84th-minute own goal before stamping their foot down on the accelerator, switching on the afterburners and reacting like potential champions by carving out a honey-sweet, last-minute winner. Precisely the brutal ruthlessness Barcelona no longer possess. Both matches helped underline a couple of things with regard to the Barcelona presidential elections.

Firstly, Koeman’s team. Having initially looked like they could run up a cricket score against a team with one win all season and a record of just 14 goals in 17 Liga matches, Barca crawled over the finishing line. Having dropped four out of their past six home points, Koeman got football’s version of the “yips.”

Instead of showing absolute determination to tuck Huesca away, increase the goal margin and assure the three points, Koeman waited until nine minutes before the end to bring on Antoine Griezmann in search of the killer goal — bizarre. One of Koeman’s other substitutions, instead of adding threatening, creative players like Konrad de la Fuente, Francisco Trincao or Riqui Puig, was to add defensive buttressing by bringing on defender Oscar Mingueza.

In the end, “mighty” Barca clung on, and “minnows” Huesca didn’t quite nick the draw they had began to threaten. Arguably the best team ever 10 years ago, treble winners five years ago, and with the potential to win their 11th Liga title in 15 years as recently as last summer, they are now bang average.

Around 300 kilometers north, the previous day, Atleti played with firmness, authority, imposed themselves and then came up with precisely the late-game ruthlessness that Barcelona have lacked for some time. When Felipe crashed a spectacular top-corner own goal past goalkeeper Jan Oblak with so little time left, it looked like this was going to be a pretty special weekend for Real Madrid — again. They gobble up points, their rivals falter. You know the script. Instead, Luis Suarez, having already made Atleti’s first goal for Marcos Llorente, pops up with one of his typical “this game’s not over until the Uruguayan says so!” goals.

The man whose imprint is all over these two stark comparisons, but whose name wasn’t mentioned all weekend in Spain’s football coverage, is ex-Barcelona president Josep Maria Bartomeu. I’d call him “outgoing president,” but he has already done a bunk.

The 57-year-old returned to Camp Nou power (having previously walked out on the club in 2005) in 2010 as second-in-command to the landslide-winning new president Sandro Rosell. President Rosell, himself, did something of a midnight flit in 2015 and Bartomeu succeeded him. Across their decadelong joint rule, the club has gone from the peak of all-time football standards to a shambles. Well done, fellas.

Even with one of the all-time great football bibles pre-installed at Camp Nou (Johan Cruyff’s), the two men managed to:

Bartomeu had his fingerprints all over what happened this weekend because his stewardship has left Barcelona in appalling shape, institutionally and in football terms, playing “let’s defend our one-goal lead” football against the worst team in La Liga. But also because it was he who decided, without having the merest football credibility to underpin his egotistical whim, that Suarez was to be kicked out the door in the summer — no arguments, no remorse, no forward planning.

Suarez, faults and all, is currently La Liga’s top scorer, was significantly responsible for Atleti wriggling out of Alaves’ bear-trap on Saturday and, once fully fit after his recent COVID isolation, threatens to be the “extra” element which makes Atleti champions for only the third time in 44 years.

In case you’ve not done the arithmetic, his nine Liga goals this season, with only 843 minutes spent on the pitch, have come at an average interval of one every match. Top of the league; top of the scoring charts. Top class.

Julien Laurens says Luis Suarez has been a bigger success at Atletico Madrid than he predicted.

In Messi’s recent TV interview, he expressed disbelief and rancour, not only that Suarez (who’d be performing at least as well at Barcelona, given the quality of chances that Koeman’s side are creating and squandering had he been allowed to see out the last year of his contract) was treated so badly, but above all that he was allowed to join a direct rival.

It’s feasible, albeit requiring fate to intervene dramatically, that by the time Barcelona are unveiling their new president (Jan. 24), Suarez might have helped Atleti beat the Blaugrana in the Supercopa final (Jan. 17) and be about to knock his old pals out Copa del Rey should the teams be drawn to play each other in the round of 16 (Jan. 27). Wouldn’t that be deliciously ironic?

The point about all this is that there is nothing (with the exception of Barcelona failing to qualify for the Champions League and losing a fortune at a time when the club’s finances are in brutal shape) which could possibly be more important for this teetering club this season than the presidential elections in a fortnight’s time. Not failing to win the league. Not being knocked out of two cups in January. Not even Messi deciding to join Manchester City or PSG in June.

Barcelona has lost its football direction, lost its sheen, is long past the best days of its greatest footballer, is deeply in the financial mire, no longer has an excelsior academy production line, is in the midst of a ludicrously, perhaps ruinously expensive real-estate project on it’s stadium campus and, frankly, doesn’t look likely to be Liga or Champions League competitive any time soon.

In these dire circumstances, it’ll reward Barcelona’s socios to put the claims of the various candidates (not all of whom will make it to polling day) under the most intense scrutiny.

The media, whether because they are savvy or because they are seduced by a cavalier old favourite, are beginning to claim that Joan Laporta (despite being shorn of literally all the satellite elements which made his 2003-2010 reign important and successful: Johan Cruyff, Txiki Begiristain, Ferran Soriano, Marc Ingla, Ronaldinho, Frank Rijkaard, Guardiola) will win at a canter.

Personally, the team, ideas and structure put forward by ultra-Cruyff and Xavi admirer Victor Font look, to me, to be much more credible. But I’m not a socio — simply a good judge.

Whatever — it’s a hard fact that when most of your attention, and the vast majority of the sports pages and air time devoted to Barcelona over January, are taken up by matters Messi, matters messy on the pitch and cup calamities or triumphs, it’ll be the simple matter of how many of the entitled voters pay attention and make good choices on Jan. 24 which will be the absolutely crucial thing for the Catalan club this month.

The phrase “be careful what you wish for” is popular, but in this case, socios, the correct warning is: “Be careful who you vote for.” Your club is at risk.