In one of the shocks of the 2022 Commonwealth Games, Arshad Nadeem of Pakistan beat world champion Anderson Peters in the javelin with a big throw of 90.18m.

Not since Ghulam Raziq in the sprint hurdles in 1962 and Muhammad Iqbal in the hammer in 1954 has Pakistan tasted success at the Commonwealth Games.

The 25-year-old went into the javelin final in Birmingham against a strong field, too, but he rose to the challenge by producing the form of his life.

Peters of Grenada had cut a relaxed figure at the Games. He was spotted giving decathletes advice on throwing during their competition earlier in the week and in his own final he started slowly before unleashing an 88.64m throw in the fifth round that took him into the lead and looked likely to earn him gold.

Yet Nadeem, who had led from the first round with 86.81m and extended his advantage in the third round with 88.00m, found himself pushed into second place, but he immediately hit back and threw 90.18m in the very next throw after Anderson’s 88.64m.

He throws a games record of 90.18m and sees off double world champion Anderson Peters. #B2022 pic.twitter.com/y9p93iPtHU

Julius Yego of Kenya, who once threw 91.39m at a Diamond League meeting at the Alexander Stadium, was third with a season’s best of 85.70m, while Keshorn Walcott, the 2012 Olympic champion from Trinidad & Tobago, was fourth with 82.61m.

Nadeem showed talent in a number of sports as a teenager including cricket but he began to specialise in throwing the javelin and in Tokyo last year became the first athlete from Pakistan to qualify for a track and field final at the Olympic Games.

He finished fifth in Tokyo and then fifth again at the World Champs in Eugene last month.

“I feel very happy and very proud,” said Nadeem. “Since the Tokyo Olympics, I try to do my best for my country.

“I feel very pleased that I took a record. I am happy that the England ground is very lucky for me.”

On the interest in his performance back at home, he added: “Many people are watching live in Pakistan. This is the month of Pakistan Independence Day and I am happy to make this historic win on this day.”

Impressively, Brume won the Commonwealth title in Glasgow in 2014 when she was aged just 18, too, but it took just 6.56m to win on that occasion whereas this would not have won a medal this year.

“It’s always been the way that I try to keep my focus and my composure,” said Brume. “I had to keep my focus out there and my coach kept reminding me that it is not over until it is over – and then we got it [gold].”

With great conditions on the final night on a sun-drenched long jump runway on the back straight, a light tailwind and decent temperatures, Brooke Buschkuehl of Australia took silver after jumping 6.88m (1.1) in the first round and following up with 6.95m (0.5) in the fifth. 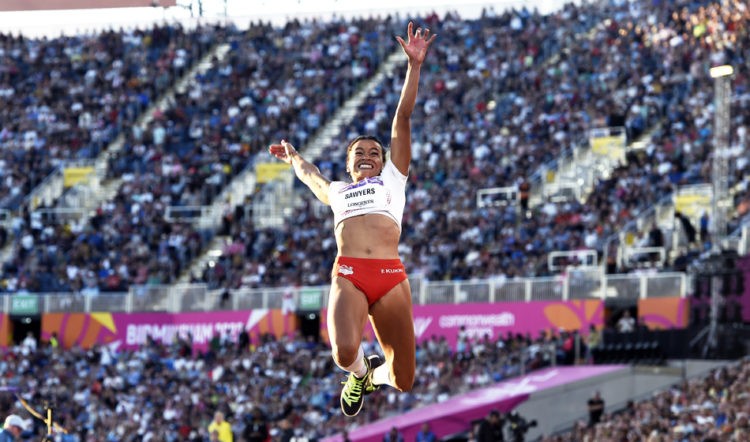 But the Stoke athlete, who found herself competing at the same time as her boyfriend Guy Learmonth in the 800m, was unable to get into the podium places.

Her English team-mates were similarly frustrated with Lorraine Ugen’s 6.60m (0.7) in the third round being her only legal jump and good enough only for fifth, while Abigail Irozuru jumped a best of 6.19m (0.4).

Whey Protein Isolate Flavor That’s Out of This World