‘Every Man Utd failure traces back to the Glazers’

“Every failure that we tag to Manchester United traces back to the Glazers.

“They saw an opportunity to make loads of money to attach themselves to a commercial juggernaut. They have drained the club of money and loaded the club with debt, with no intention to put any structures in place to remedy the facilities.

“Any facet that goes into making a club successful over a period of time that doesn’t hinge on having a legendary manager in charge. There has been no thought process in that.

“When you compare and contrast with Liverpool and FSG, they came in and their first port of call was to restructure the way Liverpool did transfers, making analytics the forefront of what they do. They now lead the world in terms of transfers done by data.

“They recruit from Man City and Bayern Munich behind the scenes for their backroom teams because they know it’s not just about throwing expensive names together on the pitch.

“This transfer window speaks to how there is a lack of strategy at the place.”

“It’s nice to hear that United’s recruitment department does exist, because it seems like Ten Hag has been running the transfer window.

“All of their targets, players they have secured and the candidates they are pursuing moving forward have stemmed from the manager.

“Ten Hag is an excellent coach, brilliant on the training pitch, but he is not a sporting director and not a scout. He does not have knowledge of all the players in world football and who would be the best option or stylistic profile.

“That’s where you need help from your club and recruitment department. Has it not been getting it, or does he not trust what he’s been offered?”

‘Man Utd fans were protesting during good times too’

“I remember United in the 1980s losing 5-0 at Everton, losing 5-1 against Manchester City. You look at players who they had in the 80s – Bryan Robson, Mark Hughes, Gordon Strachan, Remi Moses, Gordon McQueen. They still had players who knew what it meant to play for Manchester United and had a connection with the fans. That doesn’t exist at Old Trafford anymore.

“When you talk about the ownership situation at Manchester United. Some people, especially those who support other clubs, say United fans are just complaining because they’re not winning at the moment and if they were winning, they wouldn’t be complaining.

“Well, we’ve got to remember United fans were demonstrating before the Glazers took over. Some of the fans were so upset that they went off and set up their own club – FC United of Manchester.

“David Beckham wore the green and gold scarf on the pitch after Manchester United had beaten AC Milan in the Champions League 4-0. Manchester United fans were complaining from the start and during the good times as well, so I don’t accept this argument that they’re only complaining because they’re not winning.”

FREE TO WATCH: Highlights from Brighton’s win against Manchester United in the Premier League

‘While the Glazers are there, Man Utd can’t compete’ 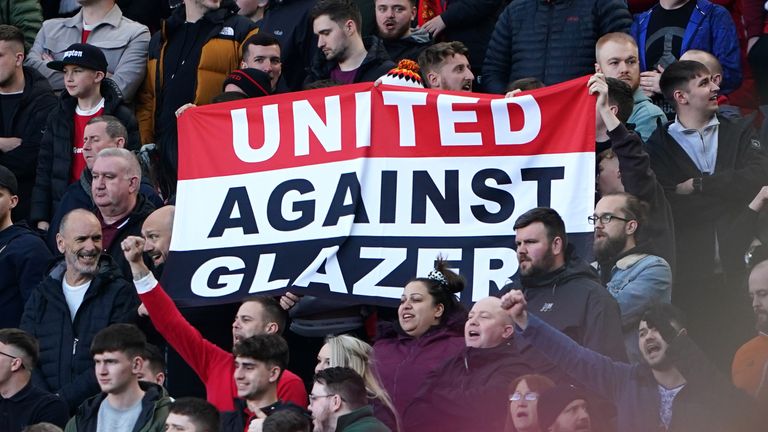 “The one common thread in the club’s decline has been the Glazer family. They’ve wasted a lot of money over the years, but I don’t think right now they have the money that they need to invest or the expertise. They don’t have the ability to appoint the best people in the right positions.

“Liverpool don’t have the commercial and financial might of United, but they’ve got smart owners that have made smart appointments. They lack the finances, the expertise and they lack the ambition.

“Everything else feeds from the Glazers. Erik ten Hag for me has no chance, because the club can’t buy the players they need. If the money was there, they would not be looking at players like Adrien Rabiot or Marko Arnatovic.

“While the Glazers are there, I don’t think Man Utd can compete.”

Neville: I’ve nothing to say | Richards: What has happened to Man Utd?

Asked about Manchester United’s bid for Bologna striker Marko Arnautovic on Super Sunday, Gary Neville said he was not surprised and admits deals like this are becoming a “pattern” for his former side.

“The first thing you do when the phone rings from Manchester United is reject the bid, because the reality of it is after losing that game against Brighton on Sunday, they’re actually negotiating from an even worse position than they were on Saturday, and that’s an even bigger problem for them,” Neville said.

“I’ve got a comment on everything in the world, apart from Manchester United signing Marko Arnautovic. I’ve got nothing to say.

“We’ve seen Radamel Falcao, Zlatan Ibrahimovic, Edinson Cavani, Odion Ighalo – desperate, it’s a pattern. It’s happening time and time again. I don’t even get angry or animated about it anymore. I’m not going to comment about it.”

Micah Richards added: “What has happened to Manchester United, seriously? I’m not going to stick the boot in. Arnautovic was a quality player, but he’s 33 playing in Italy.”

Who will be on the move this summer when the transfer window closes at 11pm on September 1?

Keep up-to-date with all the latest transfer news and rumours in our dedicated Transfer Centre blog on Sky Sports’ digital platforms. You can also catch up with the ins, outs and analysis on Sky Sports News.

Ep. #963: Greg Doucette on the Truth About Steroids