Former European 10,000m champion hopeful athletics can use its role models from this summer to help rejuvenate the sport

Even five-time Olympians have role models. Jo Pavey can reel off a string of names whose recent performances have given her an extra bit of inspiration and motivation as she prepares for her next training session.

“Seeing the likes of Eilish McColgan, Laura Muir and Katarina Johnson-Thompson win [Commonwealth gold] was amazing,” enthuses the 48-year-old, who also singles out Jake Wightman’s World Championships winning 1500m in Eugene as a moment to savour. “A 63-second last lap [in McColgan’s 10,000m win]? I mean, I was just blown away. It was awesome.”

As my colleague Jason Henderson wrote recently, however, the challenge now is to take advantage of the spotlight and grow the sport – whether that be through higher attendances, higher participation levels…or both.

Recent research conducted by The National Lottery (TNL) has shown that parents feel sporting activity such as these aforementioned championships or England’s European title-winning Lionesses football team appearing on TV and in the media provides important inspiration for their children to become more active.

With that in mind, TNL is working with parkrun to urge people to get out and get active at one of their many free events this coming weekend. There are over 700 parkruns and over  300 junior parkruns in the UK alone – but participation numbers are yet to return to pre-pandemic levels and Pavey, for one, will be lacing up her shoes and persuading others to take part.

The World, Commonwealth and European medallist is now also involved in coaching, alongside her husband Gavin, but still loves to test herself – whether that be on the trails or the track. She can see how the current generation of athletes can help attract more people to the sport but, as someone who regularly involves her own children with her running, she also knows setting an example at home is crucial, too.

“Getting people involved, it’s not a simple thing,” she says. “We’ve got the great role models we’ve seen on the track and in the field over the last few days and weeks – they’re going to really promote children wanting to get active, but also I think being a good role model yourself [is important].

“If you’re going to a parkrun, or showing that you enjoy doing parkrun, then maybe get them [your children] doing one too or going to a junior parkrun. You’re then being a positive role model yourself.”

It’s eight years since Pavey was being heralded as an inspirational figure herself, having won European Championships 10,000m gold at the age of 40 and just months after giving birth to her daughter.

“I was known for being old more than anything!” she laughs, when asked to cast her mind back to that 2014 evening in Zurich. “Winning that 10,000m title was something that really surprised me. At the start of the year, I was just coming back from having a baby – I was still breastfeeding a month before the trials took place in May and I really was just hoping to scrape into the team. When I did the Commonwealths [the 5000m in Glasgow], which was 10 days before the Europeans, and got a bronze medal I was shocked.

“I hadn’t done a race of that kind of competitive nature since I’d had a baby and then going into the Europeans I wasn’t mega confident because it was a longer race and most of my rivals hadn’t competed in the Commonwealth Games.

“It was a big field so it was very messed up and everyone was getting spiked and you were just trying to keep economical in those early laps.

“In the last lap I just tried to keep it controlled and judge it right but, when I crossed the line, I couldn’t believe it. I think I didn’t want to over celebrate because I felt like ‘no, this can’t have happened’.

“I was just known as Jo Pavey, 40 but now, going down the track, I’ve realised what it’s like to be a bit older. I’m still loving it and I train with a group, but the watch says ‘no’. It feels like the watch should be saying a different time from what appears on it, to be honest!” 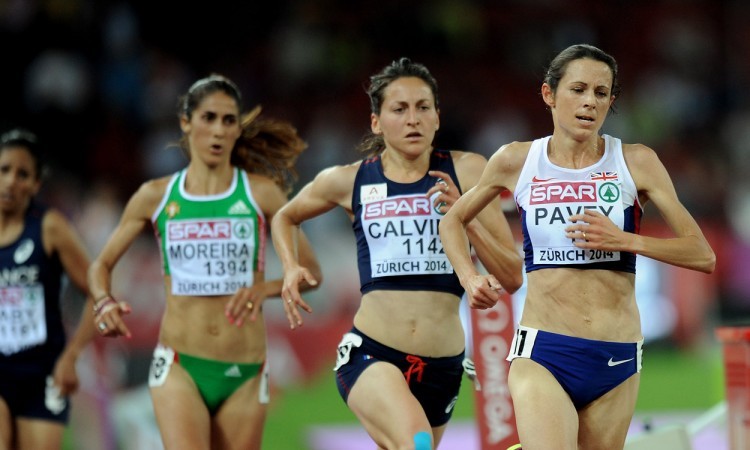 She is still getting out there, though, and loves giving back to the sport which still has her under its spell.

“My husband is the lead coach, but we’re both coaching together and we have a children’s group and then a more senior group,” she says. “We have some good athletes.

“It’s nice to be able to give something back, because we’ve spent years in the sport, I’ve really enjoyed myself in it, and you want to pass on the things that you’ve learned along the way. It’s rewarding to be able to do that.”

It’s rewarding, too, to see her children getting involved. Son Jacob is no stranger to joining his mum on a run while Emily, the baby who arrived ahead of that European gold, has now started going along to Exeter Harriers.

“She is enjoying the running but I also think it’s important they try lots of different things so they find their passion,” says Pavey. “That’s what I did when I was young. I tried all sorts of things and then just I loved distance running. That’s why I kept doing it. I think if you find something you love you want to keep doing it and get all the great experiences from it.”

With a bit of luck, this summer will help plenty of others to do just that, too.

4 Benefits Of Selenium Proven By Science

4 Benefits Of Selenium Proven By Science

Whey Protein Isolate Flavor That’s Out of This World