Briton misses out on a medal in controversial fashion while Tentoglou breaks record to clinch gold, decathlete Kaul brings the house down and Perkovic lands sixth title

It was a highly dramatic night of field athletics on the second day of competition at the European Championships in Munich.

Predictably, Olympic champion Miltiadis Tentoglou was a class apart in winning long jump gold – breaking the championships record with a leap of 8.52m on the way – but very few could have foreseen the athlete who initially celebrated winning the silver medal.

Jacob Fincham-Dukes appeared to have leapt 8.06m with his opening effort – a distance which was the same as that achieved by Swede Thobias Montler and Frenchman Jules Pommery – but was awarded second spot on countback.

The Briton even went through his lap of honour, draped in the Union flag, only to be told of a French protest due to his foot being marginally over the line, that his best jump had been ruled a foul and that he had been moved down to fifth place.

Back in April, an albeit very wind-assisted 8.45m at the Texas relays in Austin had suggested that Fincham-Dukes could fulfil his junior promise and be a future senior medal contender.

The now 25-year-old had finished second in the 2015 European under-20 Championships with future world indoor silver medallist Montler fourth, but his best legal jump outdoors was just eight metres when he lined up for this final.

Fincham-Dukes actually injured himself with that effort and struggled for form for much of the summer. That all appeared to change, however, when he jumped that 8.06m (-0.3) in the opening round which put him in the lead until Tentoglou recorded 8.23m in the second and 8.35m in the third before that record-breaking effort which is also a world lead.

The Greek, who surprisingly only took silver at the World Championships, said: “I was ready and prepared for something big and I finally proved I can do it. The championships record is special to me.”

The 46 centimetre margin of victory was the largest in the history of the European Championships.

Fincham-Dukes carried on his good form with a 7.97m (-0.3) third jump which seemingly proved helpful when Pommery also jumped 8.06m (-0.4) in the fourth round and the Briton retained second.

In the final round, Montler also jumped 8.06m but with his second-best effort two centimetres down on Fincham-Dukes it appeared the Briton had again got the better of the Swede.

However, while his first jump would have been legal under the previous system, upon further inspection the front of his shoe was found to be millimetres ahead of the board, even if the foot had not made a mark. The second Briton in the final, Reynold Banigo, finished 10th with 7.66m. 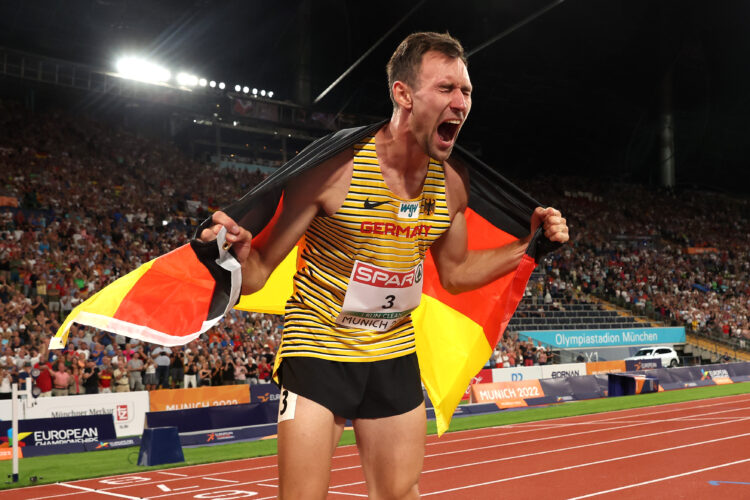 With surely the greatest decathlon finish ever and inspired by an incredible home crowd, 2019 world champion Niklas Kaul astonishingly came from 452 points back after eight events to win gold by 87 points.

Sitting seventh overnight and 477 points off leader Simon Ehammer, the German seemingly only had minor medals to aim for. However, he began the second day with a 14.45 hurdles, a 41.80m discus and 4.90m pole vault before the closing two events which made all the difference.

Roared on by a near capacity crowd at the Olympic Stadium, Kaul’s 70.98m javelin brought him into the top three before he made up even more ground by throwing a European Championships decathlon record of 76.05m.

The scores with one event to go were Ehammer 7842, Janek Oiglane 7683 and Kaul 7664 with a reasonable gap to Maicel Uibo. It would require an astonishing 1500m to make up the gap, but Kaul duly obliged.

For much of the competition it appeared Ehammer was on his way to an easy win and he easily beat his Swiss record as he scored 8468 points, but he couldn’t cope with the finishing strength and energy of Kaul, as well as the power of the German fans.

Ehammer continued his dominance into day two with a clear hurdles win in 13.75 as Athur Abele was initially disqualified with no one else close to breaking 14 seconds and his lead was now 423 points. Abele was given a reprieve and ran a separate hurdles after the discus where he ran the most celebrated and cheered 14.50 in history. 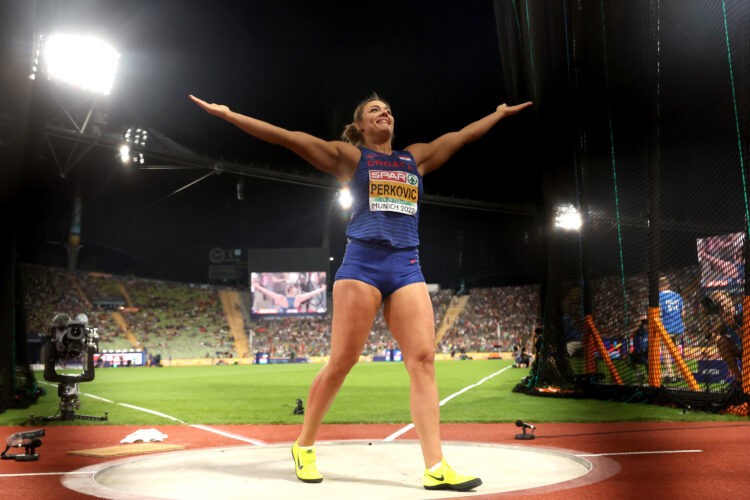 While she has won numerous global titles, Sandra Perkovic’s major claim to fame could be her winning a record sixth successive European discus gold.

Perkovic is a brilliant competitor, though, and she threw 67.95m in the fifth round and Pudenz’s response fell an agonising eight centimetres short of the winning throw. Germany also took bronze through Claudine Vita’s 65.20m.

It was their third respective double medal behind Perkovic.

Perkovic said: “I just won my sixth European title here at this beautiful stadium in front of amazing crowds. At the time I won gold in 2010 as a 19-year-old I couldn’t have imagined that 12 years later I would win my sixth title.”

Meanwhile, another Briton to make a field final was Joel Clarke-Khan in the high jump. He cleared 2.21m at the third attempt and the jumpers called it a day even though there were 13 left.

Raúl Chapado: “We want to position Spain as a leader in the future”