Zharnel Hughes landed his first gold medal since the European Championships 100m final of four years ago, leading a British one-two in the men’s 200m in Munich on Friday night (August 19).

Running the half-lap distance for only the seventh time this year, the Commonwealth silver medallist clocked a season’s best of 20.07 (-0.3) to take first place, while compatriot and 2018 silver medallist Nethaneel Mitchell-Blake surged through to repeat his feat from Berlin in a time of 20.17 to hold off Italian Filippo Tortu (20.27).

The third of the trio of British finalists, Charlie Dobson, finished just outside of the medals after fading to fourth with 20.34 in what was the first major senior final of the 22-year-old’s career.

At halfway – the point at which defending champion Ramil Guliyev pulled up injured – there was little to choose between the three before Tortu ended the chances of a clean sweep.

“I’m grateful and so happy,” said Hughes after following up 100m silver to win his second medal of these championships. “The European Championships was more of a mental game than physical because we knew we were fit so we made sure my mental strength was on par and I thought I did a great job.

“For me it was all strategy. Once I got lane three, I said to myself I’ve been behind here before so get out good enough and maintain. I knew that I was faster than other guys on the track because of my 100m. I really did the damage on the bend, I really dominated on it.”

There was delight for Mitchell-Blake, too, in winning another individual honour – particularly after the disappointment of the Commonwealth 100m final in which he finished eighth after cramping up.

“It’s been a long time since I’ve got an individual medal and at the end of the day that’s what we’re remembered for,” he said. “I’ve moved back home [from the USA] and have a great coach in Ryan Freckleton. It was really unfortunate to cramp at a home championships when I thought I had a medal but, as soon as that passed, I got my mind on the relay and winning gold at the Europeans.”

Both passed on words of encouragement and consolation to Dobson, who many in the sport view as a particularly exciting talent. Growing-related injuries have limited his racing time but the 2018 European U20 silver medallist said: “It’s been an amazing experience and I’ve loved every minute of it. It’s very new to me but it’s something to get used to hopefully. I’ll come back stronger.” 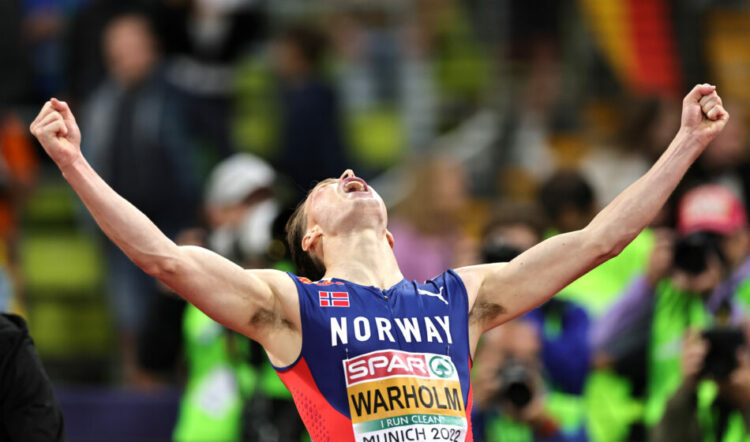 One athlete working his way back towards full strength is Karsten Warholm, who successfully defended his European 400m hurdles title and broke the 40-year-old championships record with a winning time of 47.12.

The Olympic champion and world record-holder has had a season badly disrupted by the hamstring injury which resulted in a seventh-place finish at the World Championships last month. He might not be firing on all cylinders, but he was still a very convincing winner in Munich, with Frenchman Wilfried Happio over a second behind in taking silver with 48.56, while 2016 champion Yasmani Copello won bronze in 48.78.

“I had a very tough season with injuries so to be here and to bounce back means the world,” said Warholm. “I learned that I should never take anything like this for granted. Now I am going to enjoy it even more because it was so tough. I hope that I can be injury-free and train at the high level so you can never count me out again.”

“It is unbelievable,” said Raitanen after a race in which Britain’s Phil Norman finished ninth in 8:33.05. “I knew I was one of the guys who could definitely win. I do not have the fastest times, but my race tactics were really good. I am really fast on the last lap so that was my goal. I wanted to control the race.”

What Are Essential Amino Acids EAAs?

What Are Essential Amino Acids EAAs?