Hudson-Smith says his team are ready to take on the world again after European relay triumph, while Netherlands come from behind to win women’s contest

The British men’s 4x400m relay team insisted they are “back and ready to take on the world” after winning European gold from the front in Munich on Saturday night (August 20).

The side failed to qualify for this year’s World Championships, while British men’s 400m running in general had an Olympic year to forget in 2021, but they are clearly building in strength, if this victory is anything to go by.

In a time that would have finished a close fourth in Eugene and easily won Commonwealth gold in Birmingham [had the team been chosen to compete], the four English runners combined to land Britain’s 10th title in the event, but only their second since 2002.

On paper it looked a formality with the individual 400m champion Matt Hudson-Smith and the bronze medallist Alex Haydock-Wilson included in the line-up, as well as 200m fourth-placer Charlie Dobson, but it proved to be hard-fought in a thrilling race with the result in doubt until the last few metres.

Hudson-Smith eased through the first 200m in 21.42 and then powered away in the second to run 45.05 and give his team a clear lead from Belgium at the first changeover, with Czech Republic third and Netherlands fourth.

Lewis Davey had run brilliantly in the heat but on that occasion he was doing the chasing while, in the final, he was being chased and found it a tougher proposition.

Again, Haydock-Wilson would probably have rather been following but instead he found France, Belgium and Spain were lined up behind him as he hit the straight. However, moving slightly wide, his 44.47 leg gave Britain victory by a metre in 2:59.35 – the first time they have gone under the three-minute barrier since 2017 – with Dylan Borlee closing for Belgium (2:59.49) but timed at 44.69 and followed by bronze medallists France (2:59.64), anchored by Thomas Jordier’s 44.68.

Hudson-Smith highlighted the contribution of multiple relay medallist Martyn Rooney in mentoring the team and said: “I have a great team of boys around me and we came here to win gold and we are back and ready to take on the world.

Haydock-Wilson added: “We all did our jobs and not just our four here. We are very excited and so many people to that are part of that.”

In the women’s event, Femke Bol won her third gold of the championships as she ran a brilliant anchor to bring the Netherlands home in a Dutch record and European lead of 3:20.87, a time only East Germany have bettered in the Championships.

Poland, with their two individual medallists, snatched second on the line in 3:21.68 from Britain, who had led for much of the race but clocked 3:21.74, a time which was faster than their world bronze-winning performance in Eugene and only bettered by their 15 year-old British record of 3:20.04 in Osaka.

Victoria Ohuruogu got them off to a good start as they battled with Belgium, while Ama Pipi then ran an aggressive first 200m but just lost out to Lieke Klaver’s strong finish, with the Dutch world 400m finalist later getting a rendition of ‘happy birthday’ sung by the crowd.

Jodie Williams kicked past the Dutch down the back straight and went ahead but struggled in the last 50 metres and at the final changeover it was Belgium who led, with Britain second and the Netherlands and Poland close enough to challenge.

Belgium led into the final straight until Bol powered past for a comfortable win and 400m silver medallist Natalia Kaczmarek edged Nicole Yeargin on the line even though the Scot ran a world-class 49.7.

Bol said: “It was such an amazing race and this championships feels so special to me.” 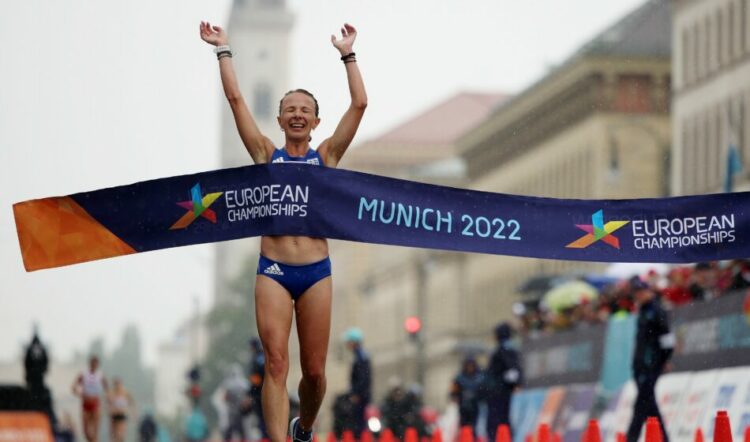 Earlier in the day, the 20km race walks took place on the wet roads in the middle of the city.

Alvaro Martin, the Eugene seventh-placer, retained his title in 1:39:11 as he was chased home by double Eugene medallist Perseus Karlstrom of Sweden in 1:19:23.

The pair were part of an eight-strong lead pack at 10km in 40:16 but a big acceleration around 15km when the tempo hit 3:47 kilometre pace saw the Spaniard break clear, with his team-mate Diego Garcia Carrera his closest challenger, although the latter faded to third in 1:19:45 as Spain took three of the first four places.

Olympic champion Massimo Stano, who won the 35km in Eugene, led early on but faded to eighth in 1:21:18, while Britain’s Callum Wilkinson, who was the official leader at 6km, was disqualified before he got to 10km.

The 38-year-old Antigoni Drisbioti had never won anything of note until she had been victorious in the European 35km four days earlier and she added the 20km title in 1:29:03.

She was only 10th at 10km in 45:14, as defending champion and championships record-holder Maria Perez led with 45:02, but the Greek joined the front at 12km and pushed clear at 16km as she upped the pace.

At the finish she had stretched the leading gap to 17 seconds over Katarzyna Zdzieblo (1:29:20), who won her third silver medal in five weeks, having gained a double second in Eugene.

Benefits And How To Do It

Benefits And How To Do It