The 31-year-old first felt the problem in 2017 when she took a gel shortly before winning 3000m bronze at the European Indoor Championships. She felt fine during the race but afterwards, she says, was “dizzy, light-headed and all over the place”.

The condition – which is called ‘rebound hypoglycaemia’ – went undiagnosed at the time and McColgan simply didn’t take pre-race gels again, but during this year she has experienced similar problems when taking sugar during long training runs.

She has consequently decided to withdraw from making her marathon debut in London – which takes place one month today – in order to solve the problem out ahead of the London Marathon in 2023 when it reverts to its traditional spring date.

She will, however, still race in The Big Half this Sunday (Sept 4) in London and is hoping to attack her British record of 66:26.

“It might become a blessing in disguise,” she said via video call on Thursday, “but it’s more frustrating because when I’m in this kind of shape I want to make the most of it.”

Looking on the bright side, she added: “It’s not a full year I have to wait. That would be more frustrating. Because it’s only six months it gives me that light at the end of the tunnel.”

Now the problem has been diagnosed, she says her negative experiences in training make sense. She has two brothers who are diabetic – and the condition is known to be genetic – although she says her mother did not have refuelling problems during her competitive career, largely because she did not drink much during her races. “She’s like a camel!” says Eilish.

She added: “I experienced it (feeling weak) during my first long run with fuel earlier this year but I didn’t know what it was. There was a weird sensation every time I took fuel on. Michael (Rimmer, her partner) said it must have been in my head as he wasn’t sure either. Suddenly I’d feel super heavy legged and not quite normal and that was with a small concentration (of sugar).”

When McColgan was training at altitude recently she felt even worse and has since been working with a nutritionist who has worked with elite triathletes, marathoners and ultra-marathoners who have had the same problem.

It follows a terrific summer where she ran in the 5000m and 10,000m finals at the World Championships in Eugene before taking 10,000m gold and 5000m silver at the Commonwealth Games in Birmingham. Then she took 10,000m silver and 5000m bronze at the European Championships. 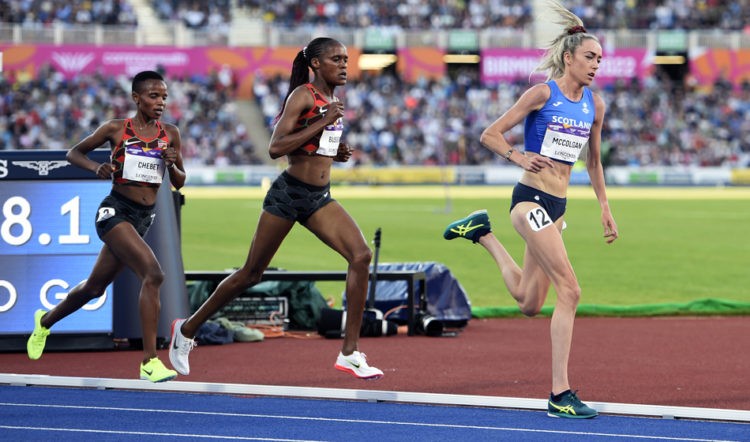 People assume she is exhausted after running the 5000m and 10,000 at three consecutive major championships, but not so. “I’m quite used to racing right the way through into October anyway. It’s quite usual for me,” she says. “I’ve also not had a normal track season. I’ve not done a Diamond League this year and I still feel quite fresh. Adjusting from altitude will be tough (for The Big Half) but if I can sneak a PB it will be a great end to the season.”

She continues: “The one thing I’m most proud of this year is how well I’ve recovered between races. Everything is so much better training-wise this year than ever before and it’s been reflected in my races.”

On facing 2021 Big Half winner Charlotte Purdue on Sunday, she says: “I’m sure Charlotte will be coming into this red hot and ready to go. She had a disappointing Eugene with catching Covid so she will be keen to run well here I’m sure. She’s definitely someone I look up to and I think one day she’ll be looking to a sub-2:20 marathon clocking.

“Samantha Harrison is also running well so we’ll all be looking to get close to our PBs. We’re mixed with men in the race so it’ll be nice to have that competitiveness and people around us for the whole 13.1 miles.”

McColgan will probably enjoy her usual large bowl of porridge for breakfast on Sunday but will not re-fuel during the race itself. Don’t be surprised if you still see her reaching for water bottles, though. “It’s an important skill to be able to have and will come in handy for the marathon next year,” she says.

“The drinks stations,” she adds, “can be quite chaotic.”

Gudaf Tsegay: The only Ethiopian to win two medals at the 2022 World Championships

100,000 Patients That Show An inverse Association With Manganese And M

100,000 Patients That Show An inverse Association With Manganese And M