He has won three major championships medals – including that memorable world 1500m gold in Eugene – and has now gone fifth on the UK all-time 800m outdoor list and set a Scottish record at the distance.

Oh wow. @JakeSWightman with a race for the record books as he clocks a personal best of 1:43.65 to go fifth on the UK all-time 800m list 🔥🇬🇧#BrusselsDL 💎 pic.twitter.com/tririQFqkN

“I really wanted to commit to race today and I have,” Wightman said. “I wanted to ran under 1:43.80, which is the Scottish record, and I did. To win a race in a field like this, I’m really pleased with that. In Zürich, I’m running the 800m as well and then a road mile in New York to finish off this long season.

“After that, I’m taking a week or three off to spend some time with friends and family. It has been one championship after the other, so I’m very looking forward to take some time and reflect on this amazing season.”

In a field which included a plethora of Olympic and world medallists, Marie Josée Ta Lou was third in 10.78, Aleia Hobbs third with 10.91 while Sha’Carri Richardson clocked 10.93 in fifth.

The fast sprint times continued in the 100m hurdles as Olympic champion Jasmine Camacho-Quinn continued where she left off last week at the Lausanne Diamond League with an inspired time of 12.27 (0.1). To put that into context, only world record-holder Tobi Amusan has gone faster in 2022.

On a night where records fell at the drop of a hat, one of the most impressive came from world javelin silver medallist Kara Winger as she set a majestic US national record, meeting record and a world lead with 68.11m. That puts her 12th on the all-time list.

Once the audible gasps of the crowd had gone – they had just appreciated the magnitude of the throw – Winger leapt in the air and you could tell how much it meant to her.

Across the pond, the Irish were also celebrating. Ciara Mageean, who had fallen short against Laura Muir at both the Commonwealth Games and European Championships, saw off the Brit and it wasn’t surprising to see Mageean set an Irish national 1500m record of 3:56.93.

“I expected to run fast and I actually had the national record of Sonia O’Sullivan, which is 3:58.85, on my mind,” Mageean said.

“I thought that I had it in me to beat that record and maybe run 3:57. However before this race a never ran under 4 minutes, so to run a time of 3:56.63 is something that blows my mind. People say that in athletics and in life every so often you have a day where you are completely in the zone.

“It doesn’t happen when you want to and you never know when it will happen. I can only say that this is how I felt today. I was in the zone and it felt like I was running on clouds. I’m so happy with this result and to be able to beat the national record of a legend like Sonia O’Sullivan is so special.”

Irish National Record 🇮🇪@ciaramageean with an absolutely stunning 1500m victory as she sets an Irish national record (3:56.93) and defeats @lauramuiruns in the process 🔥#BrusselsDL 💎 pic.twitter.com/kFVHCRyEFZ

Alison dos Santos eased to victory in the 400m hurdles as he ran a respectable 47.54 but even more impressively continued an insane streak of wins. The world 400m hurdles champion has now won 10/10 races in 2022 and will go into next week’s Diamond League final in Zurich – coincidentally the event where he last lost – as the favourite.

On a humid Belgian evening, we saw one of the quickest 3000m steeplechases of the year as world Under-20 steeplechase champion Jackline Chepkoech saw off a world class field to record a personal best of 9:02.43. It’s likely to be the first of many victories at this level for the 18-year-old and has now fully progressed from the juniors to the seniors.

Erriyon Knighton won a pretty pedestrian 200m by his standards with 20.07 (2.9) but take the wind into account and it would’ve garnered a lot more attention – given its equivalence to a 19.80 or faster. Michael Johnson is the only athlete in history to go quicker in the 200m with such a headwind.

The whole night was then almost overshadowed by Yaroslava Mahuchikh who set a Ukrainian national record and world leading 2.05m in the high jump. She tried to break Stefka Kostadinova’s world record of 2.09m from 1987 and although Mahuchikh didn’t get close to the height, she still bowed out a worthy winner. 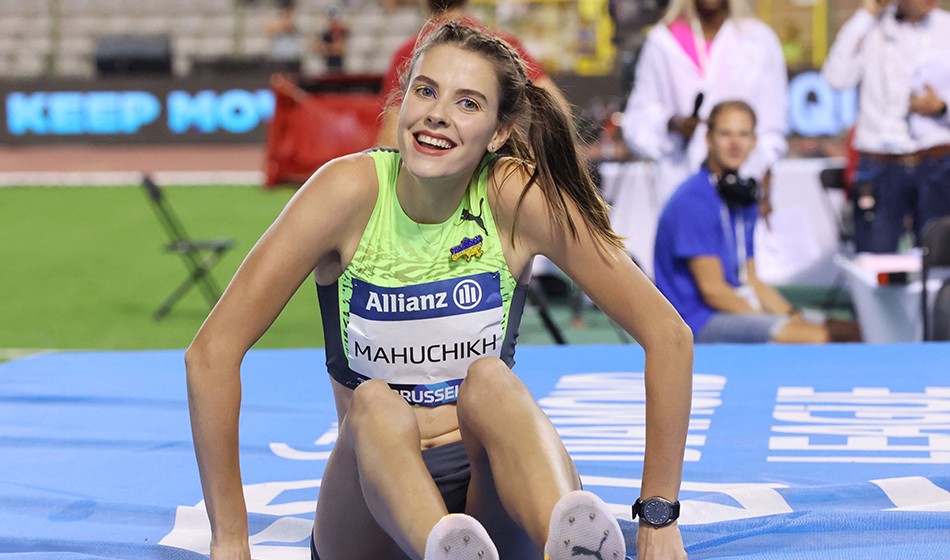 Earlier on in the night, the crowd were treated to a world hour record attempt from Sabastian Kimaru.

The previous mark was held by Sir Mo Farah after he ran 21,330m over the distance in Brussels two years ago. Alfred Shrubb held the first ever world hour record back in 1904 and it had since been broken on 14 occasions.

World Under-20 5000m bronze medallist Levy Kibet was the pacemaker and followed the wavelights that meticulously that he went through 10,000m in 27:55, just one second off what he was asked to before the race. Buoyed by the deafening sound of a myriad of drummers located on the curve into the final straight, it looked like the world record might be broken again.

When Kibet dropped out at 11km there was a lot for Kimaru – who ran half-marathons in both Rome and Seville earlier on in the year – to do. He battled through the last quarter of the hour but just fell short with a distance of 21,250m, a Kenyan national record.

Much to the confusion of everyone in the stadium, he was given a world record card as the marks for 15km and 10 miles were quicker than during Farah’s run/

Last night (September 1), the shot put took place in the Marche Aux Poissons in the centre of Brussels and it was won by Joe Kovacs by just 1cm to Tom Walsh, the pair throwing 22.61m – a meeting record – and 22.60m respectively.

Timo Werner sends Chelsea fans message ahead of £25m exit: ‘I will never forget how you stood behind me’