A leap forward for the Paralympics

The London Paralympics broke all sorts of records, whether that be through performances, attendances or viewing figures. The event was billed as ‘inspiring a generation’, with the hope that it would stimulate a growth in para sport. Ten years on, we caught up with three-time Paralympic medallist Stef Reid.

This was our home Games so nothing can compare. London was different because three things were done incredibly well. Firstly, athletes were doing incredible things. We could train like professionals with access to the same coaching, nutrition and psych as able-bodied athletes. In the past, several athletes didn’t have the funding to train 30, 40 hours a week so people weren’t seeing and responding to their performances.

The second factor was that we had sponsorship. Businesses stepped up and saw the value in para sport and its narrative. No, money isn’t everything, but you need it to access the best coaching and technology. The third thing was finally having media coverage. The public can’t love what they don’t know about. I think if BBC had covered them, the Paralympics would have been secondary to the Olympics.

Channel Four was niche and took a completely different approach and that was perfect. One of my lasting memories was a billboard they put up [referring to the London 2012 Olympics] which read: “Thanks for the warm-up.”

Do you think the 2012 Paralympics had the impact organisers had hoped for?

The Paralympics inspired a generation and transformed the way that disability is seen in this country. I know that because I see it every day. I was once in a grocery store wearing shorts and heard a conversation behind me where a mum said to her daughter: “Don’t stare, she has a poorly leg.”

The little girl was silent for a moment then said: “No, she doesn’t. She has a robot leg.” That response shows she didn’t see me as “other” or feel sorry for me, she saw somebody living their life in a different way. When I go and speak at schools, I know I’ve nailed the talk when I hear kids say to each other: “That’s so cool. I wish I had an artificial leg.”

It has challenged the idea of what perfection and strength looks like in terms of bodies. That’s a legacy London can be proud of. Could it be better? 100 per cent. For example, in athletics, we only have this platform once every four years. It’s not enough. If something is going to take hold, it needs to be constant. You look at tennis with four majors a year. We need to step up like that.

The 2012 Paralympics transformed options for para-athletes’ careers. I started in the early 2000s and people didn’t really know what the Paralympics were. I fully assumed I would have to work alongside. I got my biochemistry degree and thought I’d get a job and my employer might let me off early or I’d skip lunch to train. 2012 allowed athletes to be full-time and focus on training and media duties. We’ve since had Lauren Steadman and Jonnie Peacock on Strictly Come Dancing, Kadeena Cox on I’m a Celebrity, myself and Libby Clegg on Dancing On Ice plus more. It’s elevating the status and affirming para athletes as public figures.

Currently there are really only two options for someone with a disability who wants to be involved in sports. You’re either an elite, world class athlete or nothing. We’re missing that base recreational level making sport for all. Tanni Grey-Thompson said every disabled person should have the right to play sport and suck at it. That’s because there’s value simply in playing, not because you’re going to win a medal, but because there’s value in doing something for you. It’s what helps people live long, independent lives, particularly with disabilities.

What legacy did London leave on you?

London 2012 radically changed my life and career. My background is as a biochemist and I had my MCAT exams but deferred to focus on London. It was always an option to go back into academia, but instead I’m able make a living as a corporate and motivational speaker. London gave me a platform I could never have jumped on alone.

I’m unbelievably thankful to everyone that helped make that happen, and hugely proud of what our country did. Has this become a more regular occurrence for para athletes? Unfortunately, it’s probably still the top one per cent or 0.5 per cent that can do that. I think it has offered options and given athletes the opportunity to dream and plan their lives and careers differently but there is still lots to be done. 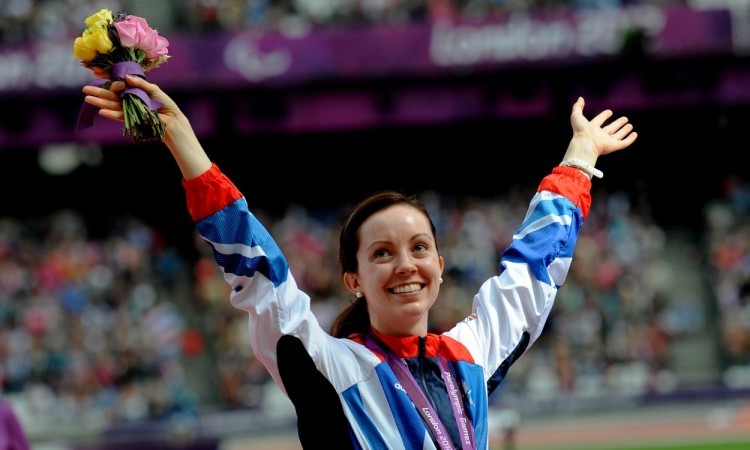 What can be done now and who is responsible for it?

Do more, show more and we will see more. We’ve got the Wethe15 campaign from the International Paralympic Committee and we’ve seen it within population stats in the UK. 15 per cent of people identify as having a disability. This is a simple marker to every media outlet. Is 15 per cent of your sport coverage para sport? I bet the answer’s no. Of course, the responsibility doesn’t rest wholly on them, but they have a huge opportunity to change the face of para sport. I think that’s what it’s going to take.

We see para and able-bodied sports alongside each other at the Commonwealth Games. Is this something you’d want to see more of?

That’s one of the best things about the Commonwealth Games. Sometimes people think you must have a disability to enjoy para sport. Spoiler – you don’t! The more para sport is seen alongside able-bodied, the more opportunities arise for fans who perhaps wouldn’t go to a para event. They see it, realise it’s seriously cool and are inspired to watch more. It’s huge for providing that visibility platform.

Have stigmas changed and how can we continue to break barriers?

I’ve seen radical changes in the way people view Paralympic sports and Paralympians. When I started as a long jumper with an artificial leg and jumped using my blade, the initial response was “good for you” or “that’s so cute”. This compares to the response I get sometimes now which is: “You’re cheating. Your blade gives a massive advantage.”

Normally that sea change takes a long time. I’m not saying either of those responses is correct, but it proves that change is possible. Have the stigmas gone completely? I’d have to say no, but I’m hopeful. I’ll never forget a moment in the gym about a year after London. I was squatting and these two young men in their 20s came up to me, not to tell me I was inspirational, but to ask for help and advice on their squat technique. It’s incredible that you would have two young males ask, not only a female, but one with an artificial leg, for advice. If that is not a sign that stigmas have changed, I don’t know what is.

What’s next for you?

I announced my retirement from long jump recently, so life is pretty different. There are three streams I want to pursue. The first being corporate motivational speaking. I speak a lot on growth mindset, diversity, inclusion and resilience motivation, and I’m loving it. The second is broadcasting. I got into it in 2015 when I had a back injury and was out for an entire season. I love broadcasting for sport but also across a wide range of topics. Thirdly, I now have my professional certificate in executive coaching from Henley Business School. I’m enjoying helping others in a one-to-one setting.

I’ve been dabbling a little bit in triathlon, which is very different for someone who’s used to five seconds explosive work. It’s a great challenge. I’m also still ice skating and actually just started working on some of the jumps. We have no idea if they’re possible to land on an artificial foot, but we’re going to try. I do think seeing people like Kadeena, Libby and myself in realms outside sport is significant. To have athletes transcending sports and in different areas is hugely impactful. The one critique by some of London 2012 was that it almost said the only way for someone with a disability to be successful was as an elite athlete. And that’s not true. There are so many ways and industries that need an overhaul. When you see people with disabilities cropping up in unexpected arenas, it’s a real statement.

You say you’re loving broadcasting? How important is it to have para presenters as well as more coverage?

You cannot love a sport you don’t understand and often I think people without disabilities can feel a little intimidated. Yes, sometimes the classification system is tricky, but my goal is to break it down, keep it simple and help people understand why what they’re seeing is an incredible athletic feat.

It’s important for para athletes to constantly be on the news and advertisements show them everywhere. That’s how we build momentum and how keep things moving to remind them parasport is not once every four years.

Unfortunately, it hasn’t been as great a change in the last 10 years as I’d have hoped. Part of that is to do with the scheduling of events. We need major events every year and more coverage of the circuits going on throughout the year. We need more storylines, more head -to-heads and as much as we can show. There’s top-quality competition going on and we have to tell those stories and get those performances out there. Changes are coming and so let’s keep boosting, shouting and covering. The future is greater than the past when it comes to para sport.

Jacob Kiplimo: The Ugandan seizing the moment and challenging the elite of distance running