Note: The new BZRK Voodoo flavor for Fall of 2022 is out — Grim Aether — with some slight changes to the previous Mad Sour Melons release. This article will be completely updated shortly.

We warned you that Black Magic Supply was hitting it hard in 2022… and now, here’s our proof: a Limited Edition BZRK VOODOO Pre-Workout!

The rumors are true – Black Magic Supply has released a second 2022 version of their hit BZRK pre workout — a repeat limited-edition product called BZRK Voodoo! This year’s first flavor was Mad Sour Melons, but the second of the year is Grim Aether, and the formula is wild.

Black Magic Supply is back for another 2022 version of their epic BZRK Voodoo, now available in Grim Aether flavor!

This one packs more energy and more citrulline, and does it in a fresh and unique way. Get ready, because a single scoop is strong:

And some of our readers may be excited about what’s not in here:

That means no tingles and no cold sweats — but tons of energy still packed inside.

This is a unique one, and a great way to try Senactiv and NitroRocket with a heavy hit of caffeine to see how you fly through your workouts.

It’s all covered below, but get in on it soon because Black Magic Supply has a limited edition supply:

In a single one-scoop serving of Voodoo from BZRK, you get the following: 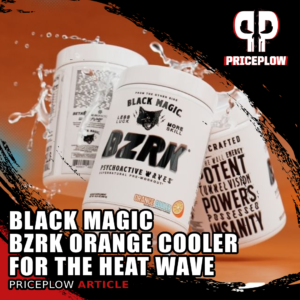 Want to tone it back down to the standard BZRK? Just in time for the HOT Summer of 2022, Black Magic launched a new Orange Cooler flavor of BZRK

For the 2022 releases of BZRK Voodoo, it was first all about Mad Sour Melons, and now it’s time for Grim Aether! But just in case something else comes out, we’ll have a full list below:

And don’t forget to stack it with the new Candy Bliss flavor of Keyz intra workout aminos, which we also recently covered. 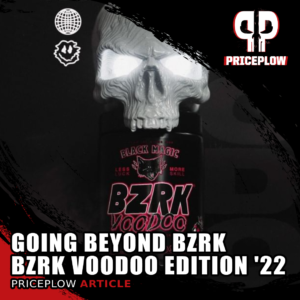 A look at the previous release, from March of 2022 – BZRK Voodoo Mad Sour Melons (now out of stock)

As Black Magic Supply definitely planned, VOODOO from BZRK is no joke. Packed with highly efficacious ingredients in truly monstrous doses, there is absolutely no way that the consumer won’t feel big effects from taking this supplement.

It’s easy to overlook, though, since caffeine is included in a blend on the ingredients label, but the dose is specified on the product label, and at 400 milligrams of caffeine per dose, you’ll want to be careful when scooping this one. If you don’t know your caffeine tolerance, start with half —or even a quarter— of the suggested amount and work your way up to a full dose.

Remember, there are added ingredients like enXtra to synergize with the stims, and the quadruple choline enhancement stack next to tyrosine and PEA should add to that pop… and then some.

So are you ready to generate some VOODOO?

Note: This article was originally published on March 31, 2022 with the Mad Sour Melons flavor, but was updated on October 10, 2022 with the Grim Aether flavor.

Celtic vs RB Leipzig live stream: How can I watch Champions League game live on TV in UK today?

Celtic vs RB Leipzig live stream: How can I watch Champions League game live on TV in UK today?