Former 800m runner Gareth Balch explains how the marketing strategies of his company, Two Circles, are aiming to revitalise major athletics events in the UK

The days of seeing half-empty stands at British Athletics’ major events could be numbered if one of Jack Buckner’s early moves as the new chief executive of the governing body pays off.

One of the first things the former European 5000m champion has done is to sign up the sports marketing company Two Circles to help sell tickets and promote the sport.

During its 11-year history, Two Circles has built up an impressive resume, having worked with UEFA, Wimbledon, The Premier League and The Hundred. Buckner has also worked with them before in his previous roles in charge of swimming and triathlon.

The 39-year-old was on the cusp of being selected for teams for major championships but felt he was in “no man’s land” as an 800m runner and decided to hang up his spikes in order to pursue a career in sports marketing.

“I gave it everything I had for seven or eight years until I was in my mid-20s and realised I was in diminishing returns at that point,” he says.

Initially he worked for Manchester City before setting up the Two Circles business. “I thought ‘if I could work in sport for the rest of my life I’d be happy’,” he says. “Manchester City was a really dynamic football club at the time and I learnt a lot there. Then, in 2011, I saw an opportunity to start a business and we’ve been doing it ever since.”

AW spoke with Balch at Hayward Field towards the end of the World Championships in Eugene (this article first appeared in our September magazine) and it was clear that he has a huge passion for athletics. After struggling to make a true impact on the track himself, he now has an opportunity to help turn around the fortunes of major athletics events in the UK due to his company’s “data technology solutions”.

What does that mean, though? “We aggregate large amounts of data to understand what audiences most want,” he explains. “We help sports understand audiences and help relay that to the biggest investors in that sport which are often sponsors or media partners to help them get more value out of them.”

During his early days at UK Athletics, Buckner has described the sport as a “sleeping giant” domestically. Balch agrees and feels there is huge potential to get the athletics arenas buzzing again.

“Athletics delivers massive audiences on a really infrequent basis,” he says. “Every four years the audiences are bigger than any Olympic sport and as big as you’d get for any sport around the world but the rest of the Olympic cycle it’s really small.

“Track and field is my favourite sport but I spend a lot of time in other sports and athletics is enormously underperforming. It’s seen far too much as a recreational pursuit instead of a business.

“The current era of sports marketing is going to be defined by a whole bunch of sports continuing to grow faster and those who don’t innovate will fall away. If you look at the audiences for the Diamond League in London from 2012 to 2019, they were in sharp decline – and this is in an era when we saw a 22 per cent growth in attendance in sports events in the UK.

“You’ve got to think we’re missing a trick, especially when we had London 2017 which showed athletics in all its beauty and its pomp.” 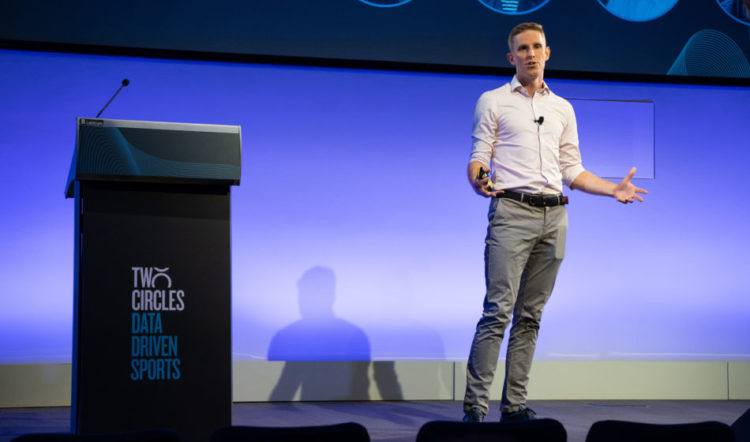 On the UK Championships, which once again featured disappointing attendances this summer in Manchester, he says: “There are friends and family in the stands and nothing more than that – and that’s a crying shame.

“The quality of the athletics is amazing and arguably better than in the past. But we can’t even get hardcore track and field fans to come and enjoy it let alone the more transient sports fans.

“There is nothing there for them and athletics has to wake up and recognise it needs to compete in that space otherwise it is on a road to irrelevance.”

Balch’s warning is worrying but, overall, he is optimistic. “There continues to be huge appeal for the sport so we’re many, many Olympic cycles away from athletics not being the No.1 Olympic sport by viewing hours.

“The heartland of people having a basic appeal for athletics is true, but the ability to create events that the average sports fan wants to come and watch – we’re a long way away from that.

“At Two Circles we want to get to customers quickly and begin to understand what they want.”

A Recovery Supplement as Strong as Your Workout