How this 77-year-old woman conquered 602 marathons

To run one marathon is an achievement but try 602 of them.

That is the astonishing amount that 77-year-old Gina Little has completed and she isn’t stopping anytime soon.

Inspired by the 1982 London Marathon – the second edition of the event – going past her house in Woolwich, she took up running at the age of 37 and completed her first ever race over 26.2 miles.

After running the 2022 Chicago Marathon, Little has now finished all of the six major marathons and is the oldest person to ever complete the feat. She first did London in 1983; New York in 1987; Berlin in 1988; Boston in 1996; Tokyo in 2010 and has now rounded it off with Chicago this year.

The numbers behind the longevity are out of this world. No British woman has completed the London Marathon on more occasions (38), she has taken part in marathons in 46 countries and has a personal best over the distance of 3:26:21.

At 77, Gina Little from London not only became the oldest #SixStarFinisher on Sunday, but celebrated her 602nd marathon! Gina has run the @BerlinMarathon 31 times, @LondonMarathon 38 times, including the 2022 races before the @BankofAmerica #ChicagoMarathon. 📸: @WMMajors pic.twitter.com/qQSsON3SgO

Over the last month, Little took on Berlin, London and Chicago. Her times were 4:33, 4:53 and 4:36 – a sign of consistency and that she still has fire in the belly. Three marathons in nearly as many weeks was a challenge, even for someone who has completed so many.

“Never in a million years would I have thought I could [do over 600 marathons],” she tells AW. “I’ve just got so much out of running. I’ve seen the world and I’ve met so many nice people over the years. I think this probably happens in most sports. It’s just been amazing.

“I was a bit worried as I hadn’t done three [marathons] on the trot for a long while. The one I suffered the most was London, in the middle, and in Chicago I was up on my toes. The people at half-way in Chicago couldn’t believe how I was [doing].

“In Chicago the ground was awful and the road was bad. I tripped a few times. The time just went. I obviously looked at my watch but not to that extent. I get to 13 miles and I think ‘oh, I’m half-way now’ and I when I got to 17 miles I thought I’m in single figures now.”

Little’s appetite for the longer distances is made easier by her frame. She is 5ft tall and weighs just over seven stone, making it easier to be light on her feet during races.

The 77-year-old has been a member of Plumstead Runners for 30 years, nearly as old as its 35-year existence, and regularly runs with the club.

When Little reached 600 marathons in Berlin last month, she received honorary lifetime membership for the race. Over a dozen members from the club went out to the German capital to mark the historic occasion and celebrated with a night of champagne.

“I must be one of the longest serving members now,” Little says. “The people that were there before me aren’t there anymore. The club have been so good.

“When I did my 500th marathon the club hired a bus. This year my 600th marathon should’ve been at Richmond [Runfest] and they hired a coach and we all had t-shirts. Unfortunately, because of The Queen’s death they cancelled the event.” 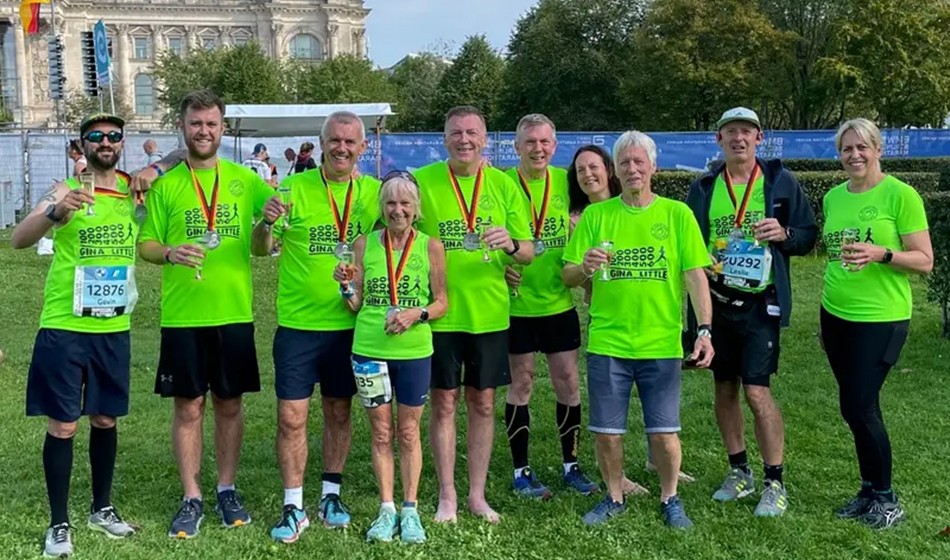 Over the decades at the club, Little has been known for her marathon running. And not just one a week.

“I sometimes did two marathons over a weekend,” she adds. “I remember going to Northern Ireland and we did six marathons in six days in six different counties. That was quite hard and it was with different people every time.

“People at my running club are faster than me and I didn’t want to be dragged around so I just do my own thing. I just thought well, ‘if I could do 13 miles then I could get through the rest of it’.

“I’m still doing good times and I’m not hurting so I’m thinking ‘why should I pack up?’ I’m just going to keep going. My doctors are amazed, not that I go there very often, and they know all about me.”

Her mindset hasn’t wavered. Get to 13 miles and just continue on. The fact that Little has done marathons on a regular basis has replaced the need for consistent training. She does half marathons as a warm-up, a taster for the bigger distance, if you like.

During our interview, she reminiscences about two marathons that catch the eye in particular. One was in St Petersburg where Little had to rush to the toilet, only to find out that she had to pay in roubles to use it. One slight problem is that marathon runners do not carry cash of course. So she had to ask a member of the public for money. 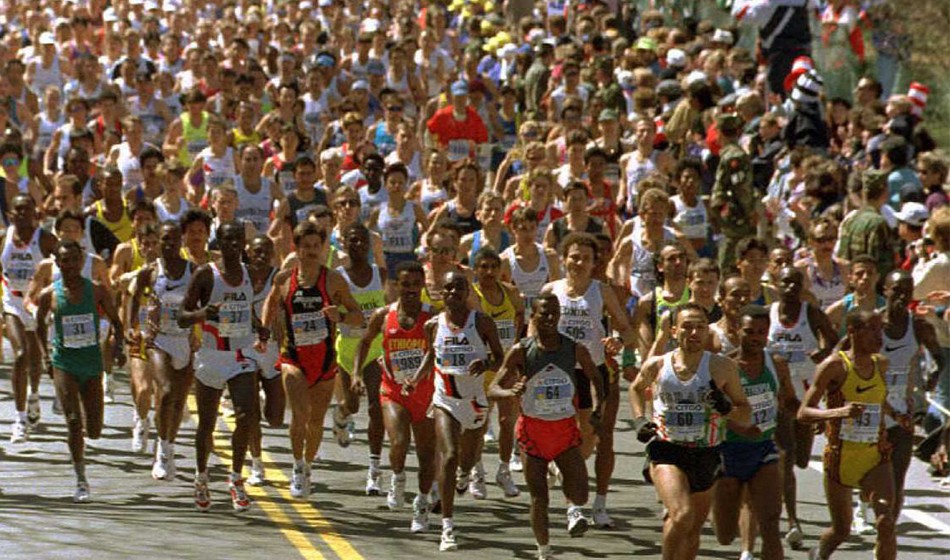 The other example was the 100th Boston Marathon in 1996, a race which saw 38,708 runners cram into waves around the streets of Beantown. It’s usual to have figures like that now for major marathons but in the 1990s it was unheard of in Boston – in 1995 there were 9416 entrants.

Little has been there, seen it and now, after Chicago, officially done it all.

Her structured weekly running plan is unsurprisingly not the same as elite runners. And why should it be? She knows what to eat immediately before a marathon but her broader diet is not that of an Eliud Kipchoge or Paula Radcliffe.

“I just eat the same food all the time,” she says. “On the Saturday before a marathon it will always be pasta or a pizza. Other than that, I just eat a normal diet. I eat lots of fruit because I don’t have a lot of vegetables.

“I consume quite a lot of jacket potatoes. I have lasagne and chips down the cafe and we tend to always have a treat in the evening like a bar of chocolate or ice cream. Nothing out of the ordinary.

“After the marathon I always want some salt after like biscuits or crisps. I need that straightaway.” 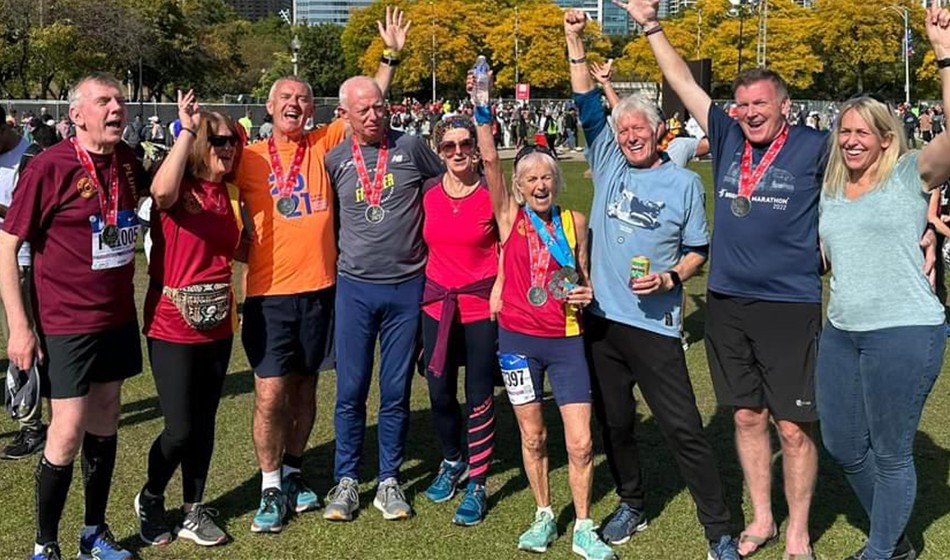 Little already has Lanzarote booked up in December, Seville in February and Cyprus in March before Brighton and London in April.

Is 700 likely? A categorical “no” is the answer. But then, Little did say she wouldn’t reach 600 marathons when she completed 500.

For everything that she has seen, what’s her advice to someone starting their first marathon now?

“Just take it easy as 26 miles is a long way,” she says. “If you start training then run a little, walk a little until you can do that longer. Relax and enjoy your first marathon because there’s always another round the corner.”