Times are of the essence for Thompson-Herah

Multiple Olympic sprints champion talks about the women setting new standards, how she worked her way to the top and why she felt “sluggish” in running 10.54 for 100m

Shelly-Ann Fraser-Pryce may have taken the world title and been the quickest woman on the planet this year, but her fellow Jamaican Elaine Thompson-Herah remains the fastest woman alive. Shoulder and Achilles problems have meant the double 100m and 200m Olympic champion has not quite been able to match her remarkable form of 2021, in which she completed that remarkable “double double” in Tokyo and later clocked the second-fastest time in history of 10.54 – a performance in which she says she felt “sluggish”.

However, the 30-year-old’s year has still brought world 100m bronze and 4x100m silver, while she stormed to Commonwealth 100m and 200m gold plus 4x100m bronze in Birmingham.

The standard of women’s sprinting is incredibly high right now. What is it like being at the forefront of the sport?

I’m happy to be a part of this history. The world record is 10.49 [by Florence Griffith Joyner in 1988] and we never thought that could be broken. It hasn’t been broken yet but we have to reach to that level. I’m happy to be seeing the women stepping out of their comfort zone and making more rivalry, making it more competitive and exciting.

Normally the men would be the talking point and I know everybody is excited to see the 100m but now we have taken over the show. I’m excited to be a part of that.

When you talk about the women overtaking the men, it’s been exciting to see all the top names regularly competing against each other. Do you think that not avoiding each other has been a part of that?

I think yes. The women aren’t shying away from competing with each other but you will not see a line-up of all the best men. [Racing against the best] helps me because it tells me where I’m at what I can fix and what can be corrected.

Michael Johnson recently told AW that he thinks athletes like you and Shelly-Ann don’t get the credit you deserve. Why do you think that is?

I observed that we women don’t get the respect that we deserve but I’m not sure why. Even though we have run that fast – and I tried to aim for that world record – it doesn’t seem like it affects anybody. I don’t know, but it seems as if we haven’t done our best, and we are doing our best.

For us, we have to just continue to stay focused, stay positive and keep working because you can’t let the outside noise outside distract you from what you’re working towards. Our plan and our goals is to continue to be the greatest, to leave a legacy behind, to be in the history books.

Whatever respect we don’t earn or whatever recognition we don’t get, we cannot let that affect us. We have to keep working on to do what we do best.

What goes through your mind during the 100m, from getting into the blocks right through to the finish line? 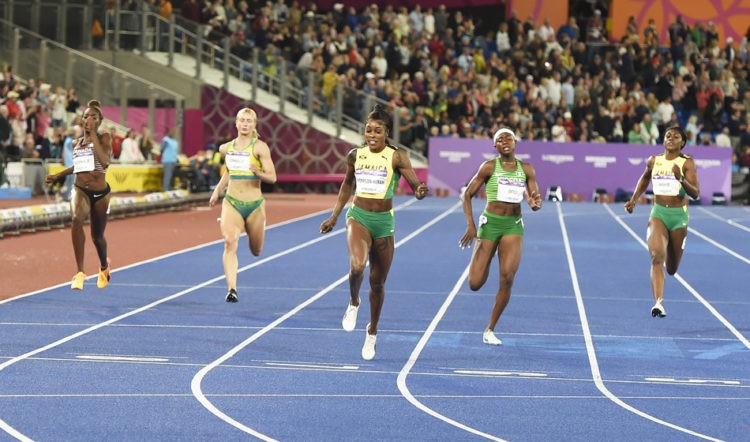 Other sportspeople describe that, when things are going well they can get into a state of flow and they almost feel like they are outside of themselves looking in. Do you remember much about your races when you feel like that?

Honestly, no, I don’t really remember much. I try to do what I do best – to get my transitions and my drive phase – and if I feel like I am where I want to be I think the excitement will start to kick in. At the Olympics I realised I was ahead of the pack and I started to celebrate too early [and ran 10.61]. I knew I could run an early 10.5.

Did you have a hunger to succeed from an early age?

My passion was always track and field and, starting out, I wasn’t the best and I was very slow. But the love I have for the sport has taken me to where I am now because you have to love something to get the result.

If you’re just there doing something and you don’t have a love or any passion for it, you will not get the result because it’s boring to you. It’s not boring for me because it’s something that I love and the hunger kicks in when I’m getting better at it.

I’m more dedicated and more determined. I’ve made more sacrifices to get the work in that I want, to get the result I want. Each time you PB or you see the best or you get a medal, you want it more and more and more so you’re going to be hungrier. My hunger now is to try to break that [world] record.

The “Champs” in Jamaica (the famous nationwide team competition among high school teams) is a huge part of the sport there. What were your experiences of the meeting?

I was a part of the Champs but I wasn’t a big star. First I went to Christiana high school. I went there for three years but I didn’t try track and field until the second year and then I moved on to Manchester High School. We learn so much at the high school but the girls were faster than me so I was like a reserve.

When did you first think “I could be good at this”? 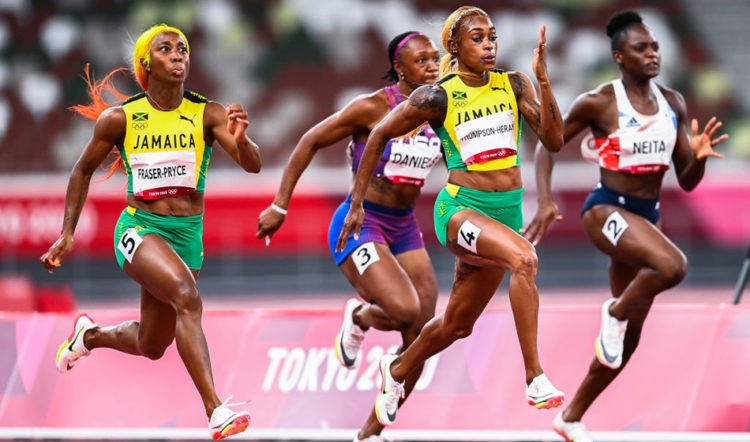 Can you remember the race where it all first came together and you thought you could be a big contender?

I think when I ran my first 10.9, that was 2015. It came after I won my intercollegiate championship where I ran 11.10 and I think the transition came from that to be able to run 10.97. Then I was invited to run the 100m at international meets, where I ran 10.92 with the bigger girls. I think Allyson Felix, Blessing Okagabare and other girls were in that race and I wasn’t even nervous.

What continues to motivate you?

I think what motivates me is the obstacles that I have overcome. You know, for the past five years, I’ve been struggling with injuries. I’ve never had a perfect season where I haven’t had any niggles but I use those as a motivation. I try to work myself always strive to get better and I think I use myself as a motivation. I know how great I am, I know what I am capable of doing, so once I’m healthy, I know everything will be fine. But I just try to work hard each time. You know, whatever changes I have, I try to work through slowly. But over the years, I have a lot of failures, I have lost championships, I’ve lost titles, those are my motivation to keep me going. 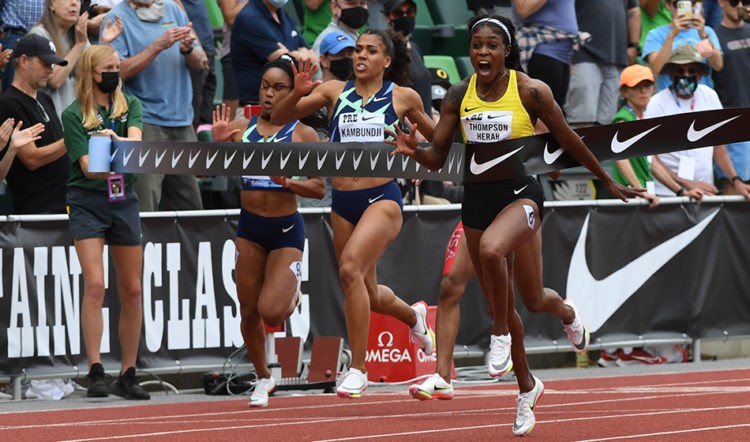 It’s interesting you said you felt slow when you ran 10.54 at Hayward Field last year?

I feel like I didn’t start properly and that I didn’t have the execution that I wanted. I felt sluggish. But what I’ve learned is that when you feel too comfortable, you’re doing the wrong thing. If you feel uncomfortable, it’s because you’re doing the correct thing so I guess that day was just the best day because I was not feeling fast.

Which of your races would you say comes closest to being the perfect race?

None of them. I haven’t seen it. When I watch my [race] videos, I do them in slow motion and I see so much incorrect stuff I’m doing. It’s funny how the body works and in slow motion you see the tiniest detail.

Anything is possible. For me, it’s all about believing, keeping putting in the work that has to go in to get that result. I think it can be broken once you have that good weather and that competition.

Benefits And How To Do Them

Benefits And How To Do Them

COROS Athletes Watch #10: The Most Excellent Adventures of Des Linden