World champion talks about training with Kilian Jornet, the secrets of Norway’s sporting success and why this week’s global event in Chiang Mai is ‘arguably f***ed up’

In 2018 we ran a feature with the headline: “Jon Albon – the greatest runner you’ve never heard of”. Chances are you will have heard of him now, though. After originally making a name for himself winning multiple world and European obstacle course racing titles and Skyrunning events, he took gold at the World Trail Running Championships in 2019 and victory at the prestigious CCC at the Ultra-Trail du Mont-Blanc in 2021.

Following this week he could have more silverware in his bulging trophy cabinet as well. The inaugural World Mountain and Trail Running Championships takes place in Chaing Mai in Thailand and the 33-year-old is one of the contenders in the men’s 40km ‘short trail’ race.

Albon is based in Romsdalen in Norway where his training partners include mountain running icon Kilian Jornet. Born in Essex, though, Albon will be representing Britain at the championships in Thailand this week with his wife, Henriette Albon, running the women’s 80km ‘long trail’ race for Norway.

Albon won the world trail title in Portugal three years ago but is likely to face temperatures of over 30C and high humidity in Chaing Mai for his race on Saturday morning. The three-day event also features uphill-only and up-and-down mountain races but both the mountain and trail events use the same paths.

In one part of the course Albon says the runners are set to charge downhill more or less continuously for 10km before then going uphill. “Who can climb after effectively doing a PB 10km in the middle of the race?” he says. “That will be the ‘grenade’ in the race.”

On his preparations, he says tentatively: “I think they’ve gone all right but it’s tough being an autumn race. Everything has gone to plan but it just depends on whether I’ve managed to make that extra spark which you really need to perform well. But I’m never the most confident going into races.”

Albon is speaking via video from his hotel room in Chiang Mai where he is relaxing ahead of his race. He appears to have a good balance of confidence, nerves and a sense of humour too. “I’m glad I’m racing 40km,” he smiles, “as the 80km will be an absolute slog.”

A late starter to running, he didn’t start competing until he was 20. During his initial years in the sport he won virtually everything there was to win in obstacle course racing – such as Spartan and Tough Mudder events, OCR world titles and the Tough Guy in the UK. Given his success in subsequent Skyrunning and trail events, he has earned a reputation as one of the most versatile endurance athletes on the planet. So how has he achieved it?

One big factor is cross-training, especially ski mountaineering in the winter. “I feel running on the quantities required really isn’t healthy for you to do year after year,” he explains. “So doing more ski mountaineering means you can get a lot of training done and then you can run more in the summer. I’m glad I discovered it as it’s propelled me to being a better athlete and it’s allowed me to stay healthier and injury-free.”

“The Norwegian culture is not quite like the Japanese style where they concentrate on the same thing every day until they perfect it, but they have got a little bit of that,” says Albon, who originally lived in Bergen before moving to Romsdalen.

“If they are going to do something they throw themselves into it wholeheartedly. They look at research and data and analyse and then perform. Even the kids going to the gym at school lifting weights have rolling, warm-up and special technique routines. When I was a kid going to the gym in England it’d just be some people do bench press and biceps exercises to get as big as they could – and that was it.”

He adds: “It’s a well-off country too so people have more time to train and the kids have a more secure environment to pursue what they want to do. It’s also a great country to train in with a good winter and summer and great equipment. It’s a genuinely nice place to live.”

Has this rubbed off on Albon? “I’ve got a mixture of both. I have a bit of the British mentality. My dad always said I won races more with heart than skill and I’ve maintained that gritty mentality but in Norway I’ve become more of an athlete and how to make sacrifices. A lot of this I’ve got from my wife. She does a lot of research on things like nutrition and I soak up the benefits.” 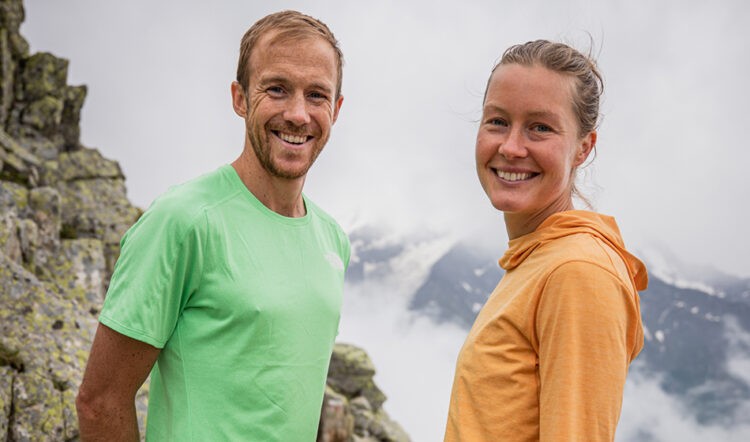 Albon has also been inspired and influenced by Jornet, who moved from Spain to Norway with his wife and fellow endurance athlete Emelie Forsberg. “I’ve been thrown into an environment where these athletes are doing an incredible amount of training but not classing it as being a big deal,” says Albon. “So when I do my little bit of training and it doesn’t feel like much at all.

“These people are trying to be really good at mountain sports and a lot of mountain-trail athletes are in road running environments and taking the road philosophy and upscaling it to get good in the mountains and trails, which is just wrong. It’s a completely different sport that needs a different type of fitness.”

Offering an insight into the kind of training needed to excel in mountainous trail races, Albon says: “The way Kilian trains for example is very different to how you’d advise a road or track athlete to train and it really does work. For example we might do a 700m climb, then down and maybe do it again and then down, then some flat intervals such as 5x6min and then another 700m climb and then down again. It teaches you to run at your honest threshold speed as opposed to your sexy threshold speed.”

Albon describes an uphill running drill that Jornet taught him to do as well. It involves running on an ascent for three minutes with “really fast feet with under the shoulders” before switching into a much longer bounding stride “to create a heavy leg feeling”. He explains: “It works on both ends of the spectrum so when you put them together you have a really nice running stride.”

Albon adds: “If you ask most people ‘would you like to do this drill uphill for 30min or do 4x4min intervals on the flat, they will take the latter as they think it’s ‘hard and it will be over with’, but it’s not specific to the race.”

So what’s Albon’s advice to runners transitioning from the roads or track to the trails and mountains? “A lot will be used to shorter distances so they will need to up their engine or capacity to be able to last the distance,” he says. “I feel there are a lot of people who can be fast on the first climb but by the time they get to the second ascent they’ve used up all that ‘sexy fitness’ that they got from all their intervals. So they need to do a bigger base training period and get out more in the mountains and learn to move efficiently.

“They should already have a good running stride but now they need to do it on rougher terrain. I also think you can’t build a big engine by just running so they need to cross-train and up the amount of hours they do.

“Leg conditioning is important too. Sometimes you need to pound your legs on the downhill so they can adapt – and then do it again. You need to make yourself as fit as possible but conditioned to mountain and trail running. It’s not just about who has the biggest power to put one foot in front of each other as fast as possible. You need to be ready for the terrain.”

But he warns: “There’s no one magic way for everyone to train. A lot of it is about finding something that works for you. Sometimes you just need a change, too, as something might work for two or three years but then you have to find a new training stimulus.

“Generally people are still following studies that are done with road and track runners where the objective is to make you as fit as possible. That’s only one piece of the puzzle, though. You also have to be conditioned for what you are going to do.”

Albon has created a training app as well but feels at the moment it tells runners what many of them don’t want to hear. “I feel I’ve made the app that everyone needs but no one wants because it tells you exactly what to do but there are only a special few people who will embrace it and do it for two or three years, because that’s the time it takes to really make inroads.”

He adds bluntly: “What we try to do is arguably a bit f***ed up! We will have to run uphill for an hour (in Chiang Mai) and then do a 10km PB downhill and then run uphill for another hour. It’s not normal for the body and unless you do something like that in training it’s not going to be able to do it in the race.”

Which brings us back to this week’s championships. Win or lose, he will take a break after Chiang Mai before heading off to The North Face athlete get-together in the United States.

The relentless growth in popularity of trail and mountain running means there are often noises about getting the sport into the Olympics, too. Albon is not so sure, though.

“The moment people start talking about the Olympics, for me the Olympics just ruins sports,” he says. “If that’s where trail running ends up going and we do five laps of the mountain bike course then it’s in that danger zone of becoming more mainstream and with the purer side of the sport becoming lost.”

If the sport had Olympic status it would certainly help lift his profile, but is that what he wants? Is he still one of the greatest athletes most people have never heard of?

“A little bit,” he smiles, “but sadly social media does govern all these days and I’m definitely one of the lazier people when it comes to social media. I’m perfectly happy with where I am though.”

Coffee with Larry, for Monday, October 31, 2022, adidas makes the right move, the value of cross country for humans…