Last time out, we started our Top list for the best female African athletes in 2022, taking an in-depth look at what they achieved and how much it influenced the world of athletics.

For an athlete who enjoys speaking to her family before and after every race, Gotytom Gebreslase’s success in 2022 was one achieved against all odds. The long-standing internet and phone blackout in the country’s Tigray region – implemented by the Ethiopian government amid fighting between government and Tigrayan forces – means her contact with her parents is sporadic and infrequent. Still, it didn’t deter her.

After the Ethiopian victory at the Berlin marathon last year’s debut with a time of 2:20:09, the eighth fastest winning time in the Berlin Marathon’s history, she set her sights on winning another major in 2022.

Gebreslase entered the Tokyo marathon with so much optimism, regardless of what was happening in her country. The 27-year-old ended up in the third spot with a then personal best of 2:18:18. Her next goal was to make the highly-competitive Ethiopia’s national team in the marathon ahead of the World Championships.

In Oregon, Gebreslase survived a two-way battle with Kenyan Judith Korir to win the women’s marathon title in a world championship-record time. Gebreslase broke away with about two kilometers to go and never gave Korir a chance down the final stretch to cross the finish line in 2:18:11, smashing Briton Paula Radcliffe’s previous mark of 2:20:57 set in 2005.

Gebreslase made her way to the difficult and undulating course of the New York City marathon in early November and put up a good fight in the Big Apple as she finished third with a time of 2:23:39.

With the unwavering support of her family despite the crisis, Gebreslase has persevered and stood out this season amongst African athletes.

At No. 4 on our countdown is Mary Moora. The Kenyan shone like a million stars over the 800m this year, breaking all sorts of records and challenging the established order in the sport. Although the East African nation has held sway in the men’s 800m for the last two decades, their women have struggled to win medals at the top level in the last couple of years.  Mary Moora surely di changed that narrative in 2022.

It wasn’t until last year that Moora started to focus her attention on the 800m after spending a large part of her junior career as a quarter-miler, and although she still runs the 400m sparingly in order to work on her speed endurance, it was in the 800m she wrote her name in Gold this year.

After kicking her season off with a couple of wins, Moora suffered a loss on home soil at the Kip Keino classic, with South Africa’s Prudence Sekgodiso beating her. The Kenyan picked up the pieces and put together a couple of victories afterward, winning races in the Diamond League in Rabat and Stockholm.

Moora took that form to the World Championships in Oregon in July. There, she reached the final of a global championship for the first time in her career after near misses in Doha and the Tokyo 2020 Olympics. In the final, she came close to beating Olympic medalists Keely Hodgkinson and Athing Mu as she eventually picked Bronze in a Personal Best of 1:56.71.

Less than a month after picking up Bronze in Oregon, Moraa was keen to improve on her performance which she did in style by winning gold for Kenya in the finals on Saturday night. Moraa clocked 1.57.07 to emerge top ahead of local British favorite and Olympic silver medalist Hodgkinson, who took silver again in 1.57.40.

To crown it all, Moora added the Diamond League Trophy to crown it all to her collection, winning in Zurich with 1:57.63.

Ethiopia was the highest-ranked African team at this year’s World Championships, finishing second behind winners United States of America. In their team that churned out ten medals at the Championships, only Gudaf Tsegay won two medals.

The middle-distance runner picked up Gold in the women’s 5000m and Silver in the 1500m. Before 2022, Tsegay’s only global medal over 5000m came to the Olympics in Tokyo in 2021. It came off the backdrop of winning her National Championships as she won Bronze in the Asian city.

Just over a year after breaking the world indoor 1500m record, Tsegay picked up her first Gold indoors when she won the women’s 1500m in Belgrade. That spurred her into the outdoor season with much focus on the women’s 5000m, despite training well for the latter.

Tsegay went into Oregon fully prepared as she looked to get the double. With the women’s 1500m coming up first, the Ethiopian had a difficult task in reeling in Faith Kipyegon over the distance, knowing fully well how the Kenyan had been a stalwart in the discipline. And in what was a three-woman race at the bell for the last lap of the race, Kipyegon took the win, with Tsegay taking second in 3:54.52.

Tsegay returned to the track five days after to contest what would eventually become a thrilling 5000m final. It pitted her against her countrywoman, Letesenbet Gidey, and double Olympic Champion Sifan Hassan. In a race that came down to the final 100m, Tsegay used her 1500m speed to prevail in a thrilling sprint finish and gain her first global outdoor Gold in 14:46.29 as little more than a second separated the top three.

Although Tsegay is still in her mid-twenties, this year proved how much she’s ready to ruffle feathers with the heavyweight and would hope to consolidate on the success going into 2023.

Sometimes it is the raw numbers rather than the words that best encapsulate the performance’s quality. Faith Kipyegon entered the 2022 season with the aim of consolidating her status as the greatest 1500m runner of all time and also owning the world record in the event.

Although the achieved the former, the latter still eluded her by whiskers. It really doesn’t matter because the manner of her win against her rivals this year was a world apart, with the Kenyan winning all of her races in the event this year. 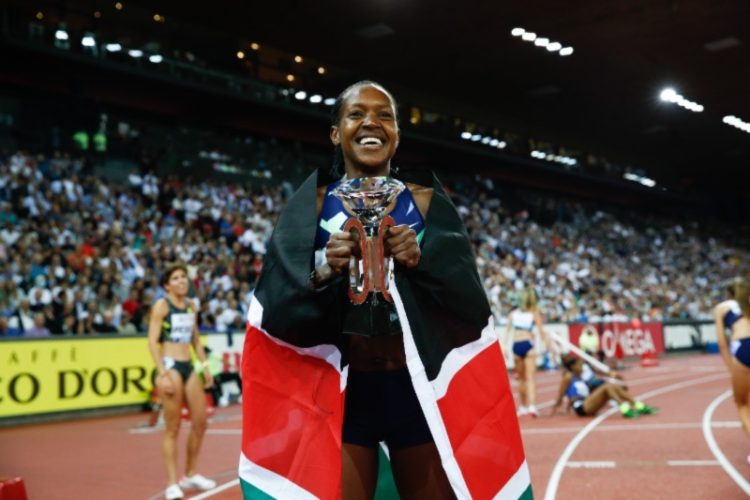 It was smooth sailing for Kipyegon at the world championships, winning her second title in an incredible 3:52.96.

At the Diamond League final in Zurich, Kipyegon ensured her competitors did not have any breathing space as she won her fourth Diamond League title over her signature event.

Her tenacity is unwavering as she continues to work on becoming the most decorated 1500m female star; Kipyegon has her eyes on an unprecedented third world title in Budapest in 2023 and a third straight Olympic gold at Paris 2024. She is also keen on leaving a lasting legacy on and off track.

What a year 2022 was for Tobi Amusan! She undoubtedly is the World No. 1 100m Hurdler at the moment, and her achievements saw her reach lofty heights this year. After so many near misses on her way to winning a global title, the stars aligned for the Nigerian this year.

Amusan was so imperious this year that she won every major final, and bar the few races she lost in the Diamond League to her rival Jasmine Camacho-Quinn; it would have been a flawless year for her.

Between the months of July and September, Amusan defended her African title in Mauritius, won her first world crown, picked up a second Commonwealth Games Gold medal, and capped it off with a Diamond League Trophy. Amusan couldn’t have asked for more.

In the final, Amusan won in 12.06, but with too much tailwind for record purposes. Regardless, she showed the possibilities of how lower the record can go.

Marc Scott and Jack Rowe in winning form on the country

Marc Scott and Jack Rowe in winning form on the country