While it may be holiday season everywhere else but the team over at MyPotein are seemingly immune from relaxation. They’re back with two delicious flavors that spring from a separate awesome collaboration from The Pre-Workout line: Mike and Ike Sour Watermelon and Caribbean Punch.

Myprotein has come out with two awesome new Mike and Ike flavors for The Pre-Workout: Caribbean Punch and Sour Watermelon!

Myprotein already did this particular flavor collaboration with Clear Whey Isolate, and now we’re psyched to guzzle down the same fruity flavors before our workouts, too – especially because the Caribbean Punch flavor was so incredible.

Myprotein’s collab with the Mike and Ike dates back to 2021 when they released two new Clear Whey Isolate flavors: Strawberry and Screamin’ Sour Cherry. Since then, the company launched additional products in varying Mike and Ike flavors, and now they’re introducing two of our favorites to their The Pre-Workout line:

While The Pre-Workout already gave us the option of purchasing Strawberry and Screamin’ Sour Cherry, now we finally have one of our favorite Myprotein and Mike & Ike flavors added to the mix – Caribbean Punch. Not to knock the Strawberry flavor though, because that one’s nearly as good as the legendary Black Cherry Vanilla flavor!

Before we get into the summary of The Pre-Workout, let’s search for some deals on PricePlow and take a look at our video review of the new flavors:

THE Pre-Workout – How It Works

As always, we love to mention how popular this pre-workout is with lower-stimulant users, since you can get efficacious doses of many ingredients at 1 scoop — and there’s only 150 milligrams of caffeine in each scoop!

The full active and inactive ingredients in one image from the previous Mike and Ike flavors — note the added pectin in here that added a bit of extra texture!

You can see our original Myprotein The Pre Workout article for a more in-depth review of these ingredients.

All THE Pre-Workout flavors

If candy-themed pre-workouts aren’t your cup of tea, The Pre-Workout comes in a ton of other flavors. One of our all-time favorites is Black Cherry Vanilla: 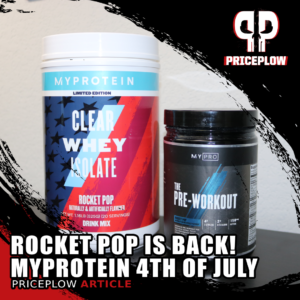 Myprotein is back with their Rocket Pop flavors for the 2022 4th of July, but this time they’ve also added it in THE Pre-Workout!

Fruity Flavors are Perfect for Pre-Workouts 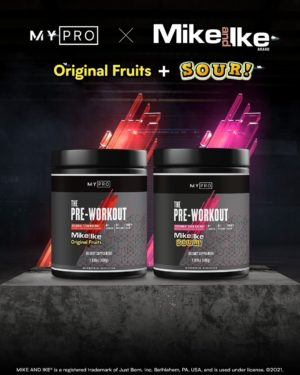 The Pre-Workout already comes in 2 other awesome Mike and Ike flavors: Screamin’ Sour Cherry and Strawberry.

It’s difficult to explain, but there’s just something that feels right about fruity pre-workouts with a candy-like flavor. Protein powders seem to work extremely well with heavier, dessert-style flavors; but refreshing, bright tastes provide the perfect fuel for getting amped up before a great workout.

That’s why Mike and Ike Sour Watermelon and Caribbean Punch pair so well with The Pre-Workout. They feel light, yet satiating. And with a reasonable hint of sourness, you can’t help but want to immediately pump iron until your eyes pop out. This more adult version of the classic flavor will make you feel like a kid in a candy store — sugar rush, and all.

One of our favorite supplement-industry trends over the last few years has been the proliferation of collaborations. Brands are doing what are essentially crossover events using classic flavors… and it’s awesome. In this area, no company is more prolific, it seems, than MyProtein.

The Mike and Ike collab, specifically, has been steadily marching through MyProtein’s entire line of supplements, and it is only a matter of time until every conceivable nutritional supplement from the company will taste like the iconic candy.

Back when Myprotein released The Pre-Workout in Mike and Ike Strawberry and Screamin’ Sour Cherry, we were hoping they would release a Caribbean Punch flavor… It’s almost like they read our mind.