When you are learning to drive, should you fail your test the first time, you go back to the drawing board, further your knowledge, gain more experience and persevere until you eventually succeed.

It may seem like an odd comparison to make, but it is a simple way to explain the way Southampton have risen to the second tier of women’s football just five years after forming.

The new guise of the club’s women’s team – Southampton FC Women – was established in 2017, 12 years after Southampton Women’s FC had its funding withdrawn in the aftermath of the men’s team suffering relegation from the Premier League.

In March 2018, they applied to leap from the Hampshire Women’s League Division 1 to the FA Women’s Championship, but West Ham and Manchester United were selected ahead of them.

There was not going to be a simple route to the top.

Four months later, they appointed Marieanne Space-Cale MBE as the Head of Women’s and Girl’s Football. A true pioneer of the women’s game in the 1980s and 90s, she spent nine years at Arsenal, three at Fulham and was an England international for almost two decades.

As figureheads go, the club could not have selected a better one, particularly given the fact they found themselves so far away from the professional game.

The decision to appoint the 56-year-old has since turned out to be nothing short of a masterstroke.

In 2018/19 – Spacey-Cale’s first season in charge – Saints won the Southern Region Premier Division with a flawless record of 18 wins from 18 games.

The next two seasons in National League Division 1 South West were curtailed due to Covid, but they applied for upward club movement in the summer of 2021 and became part of National League Southern Premier Division.

They won that one at a canter, too, finishing nine points clear of second-placed Oxford having scored 99 goals and lost just once. That earned them a place in the play-off, where they came up against Northern Division winners Wolves, with Sophia Pharoah’s first-half goal enough to finally seal promotion to the Championship.

“I made it quite clear when I arrived that the application to the Championship not being successful was probably a positive as much as a negative,” Spacey-Cale explains in an exclusive interview with Sky Sports.

“Though we didn’t get the licence in the first year, we’ve now played our way into the Championship and built the infrastructure and the resource that we need to be at this level.

“We were playing in non-elite football, but instilled a more elite mindset in the players so they believed we could achieve this and that we’d work hard off the pitch to ensure that, when they got out on the pitch, all they would have to think about was playing and performing to the best of their ability.

“We’re continuing to build that so when we do hit the next level, we’re ready for that as well.”

It goes without saying that there is a serial winning mentality at the club, and Saints have taken to Championship football straight away. Going into Sunday’s trip to current league leaders London City Lionesses, they have won five of their nine league outings so far.

Turning professional over the summer has helped, but doing so did not actually hinge on promotion.

So what has changed and helped them adapt since they once again stepped up a level?

“The support of the club is something we are very thankful of to allow us to be there now and be full-time now, but knowing in the back of our minds that, if we weren’t successful, we’d have had a better shot at being successful the season after.

“We’ve now got more contact time with the players, not just on the pitch but off the pitch. So performance psychology, gym work, education workshops around nutrition and diet – all the things we were doing but on limited time as they were only in three evenings a week.

“Now we can expand that. Generic workshops for players are very good, but individualised programmes around players’ own nutrition, their own gym programmes, their movement control patterns are even better.”

The women’s team are based alongside their male counterparts at the club’s Staplewood training base, too, which, at a minimum, allows for greater collaboration between the coaching staff.

“This is a club that allows that to happen and we’re not separated at all; you can walk down corridors, around the training pitch and bump into first-team players and everyone will have a conversation, support each other and wish each other well.

“It’s a fantastic environment to work in. If there’s something that’s in my head about a coaching aspect and I’m dwelling on it, sometimes just to walk up the corridor to have a chat with some of the other guys here helps.

“It’s nice because it comes back, it’s not just me going to them.” 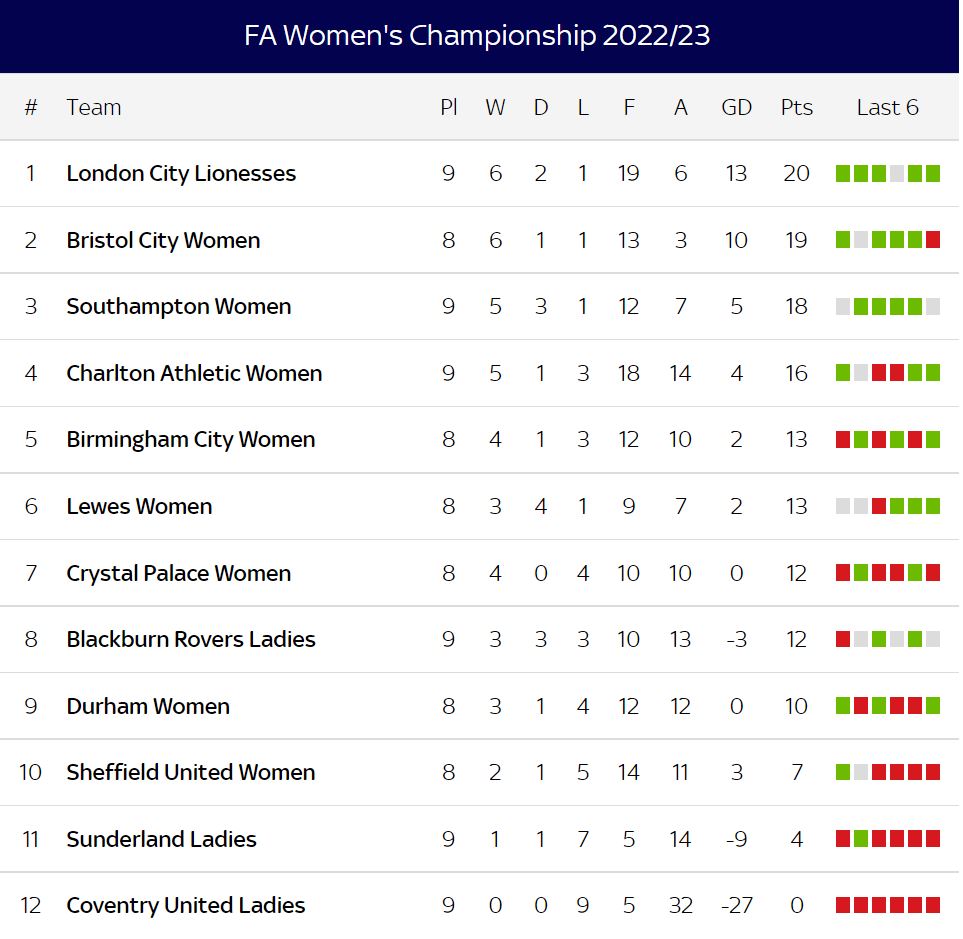 If that was not enough, Spacey-Cale’s troops play many of their home games at St Mary’s, too, having previously utilised AFC Totton’s 3,000-capacity Testwood Stadium as their sole venue.

“You can take the gender out of the football because it’s about what the matchday experience is for the supporters, for the players, for the staff and it’s mirrored to what would happen on a Saturday at three o’clock,” she adds.

“The number of fans that can come into St Mary’s versus Totton is very different, so that’s one of the things playing at the stadium will definitely give us, the opportunity to develop a greater fanbase. And the accessibility to the players and the signing of autographs and pictures is still available whether it’s at Totton or St Mary’s. That’s key to the whole matchday experience.”

It is part of a drive to help increase the club’s fanbase as they continue their meteoric rise, which has been aided by Starling Bank’s sponsorship, which will see the bank’s logo feature on the front of the women’s team’s shirts throughout the 2022/23 campaign.

The sponsorship is a continuation of Starling’s celebration of women’s football, following the bank’s national sponsorship of the UEFA Women’s Euro 2022, which saw it launch the first fantasy football game for women’s football in the UK and award £23,000 in grants to women’s grassroots teams.

“This new partnership is just going to take us to another level. One of our pillars in our goal tree is about inspiring our community and a big part of the partnership with Starling is around our community and working with coaches and young people to have active lifestyles, particularly women.

“This partnership will certainly help us on the pitch and gives us a sense of pride and that we want to keep pushing because Starling believe in us, so we’ll support that belief back and work had for them

“But we’ll also to work hard to inspire the coaches and thousands of volunteers in the region who work full-time during the day and then help young boys and girls in training. If this partnership is going to be as successful as we think it is, that will be one of the big successes.”

Combine all the factors that have contributed to – and will continue to contribute to – Southampton’s success and there is only one aim.

“We want to be in the WSL. That’s always been our aspiration and I won’t apologise for having that forward thinking,” Spacey-Cale adds.

“Everything we have to prepare for is a challenging game that will test us as coaches as well as players. I’m happy where we are, I know there’s work to do, but I know full well it gets tougher from here.

“It might take two or three years to get to the WSL, but we know that’s where we want to be. That’s what we’re driving towards. Every game we play in the Championship is a step towards that we however long it takes us, we know that we will get there.”

Southampton Women have passed their test – several times over – and now they are coasting nicely on the road to the top flight.

Japan vs Spain live stream: How can I watch World Cup 2022 game for FREE on TV in UK today?