In some ways it has been a welcome and rejuvenating experience for Ben Brereton Diaz to have a mid-season break. But in others the Blackburn striker knows where he would have rather been for the last few weeks.

Chile’s late collapse in qualifying, losing four of their last five games, saw them miss out on a trip to the World Cup in Qatar.

“I love watching football and I watch as many games as I can every day,” Brereton Diaz tells Sky Sports. “It’s been very entertaining so far, I’ve been really enjoying it.

Blackburn Rovers’ Ben Brereton Diaz has been in red hot form this season, take a look at the Chilean’s 9 goals from the Sky Bet Championship so far this season.

“But of course I’d want to be there. Myself and all the Chile boys, we would have loved to have been at the World Cup. It’s the greatest stage of football.

“We couldn’t get there this time, but we’ve got to work hard and hit the ground running when qualifying starts in March to make sure we don’t miss out again.

“When I meet up with them that will be the conversation with the gaffer and the boys. We’ve got a great team so hopefully we can get some good results and be there in four years.”

Chile’s loss will no doubt be Blackburn’s gain. The 23-year-old has already made 25 appearances this season and the rest will have done him some good.

His national side clearly agree as head coach Eduardo Berizzo left him out of their two friendlies last month so he could have a break.

“We had 10 days off so I had a holiday and relaxed,” Brereton Diaz says. “But we’ve been back in since we had some training in Spain with a few friendlies to get back up to speed. We’re ready to crack on with the second half of the season.” 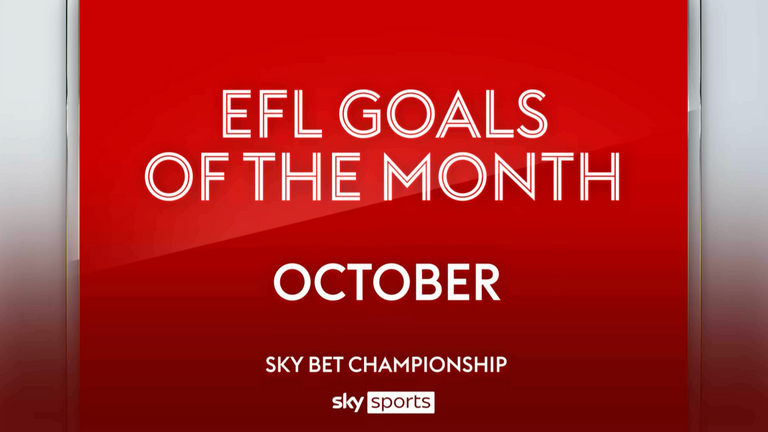 Here’s the nominees for the Sky Bet Championship Goals of the Month award for October.

It was a rare international camp missed for a striker that has been one of the remarkable football tales of the past few years. Born in Stoke to an English father and a Chilean mother, his career trajectory changed completely when he mentioned his lineage in a Blackburn matchday programme.

It saw his profile updated on the popular PC game Football Manager, which attracted the notice of the Chilean FA. And in the middle of last year Ben Brereton became Ben Brereton Diaz, as he added his mother’s surname, and all of a sudden he was playing in the Copa America alongside Alexis Sanchez, Arturo Vidal and Co.

Whether it was training with world-class talent or the confidence the call-up brought, it took his game to a new level. He scored seven goals in 40 games in the Championship in 2020/21 for Blackburn, while last season he mustered 22 in 37.

“For myself one of the best things has been training with all the players, watching them play and learning from them,” he says. “There are some outstanding footballers in that squad.

“To score for them when I first went out there was an incredible moment for me and my family, here and in Chile.”

Back at home it has been a good season so far for Blackburn. Before the restart of the campaign – which gets under way as Blackburn host Preston on Saturday, live on Sky Sports Football – they find themselves third in the table.

Strangely they are yet to draw a game in 21, with new boss Jon Dahl Tomasson’s approach generally ending up in an all-or-nothing result. One thing that hasn’t changed from last season is that Brereton Diaz has proved vital to their cause again, with nine goals – including a strike against Sunderland that won him the Sky Bet Championship Goal of the Month award for October – and one assist contributing to their overall tally of 24.

And he has thoroughly enjoyed working under a former forward who was one of Europe’s best of the past quarter of a decade.

“The manager has been brilliant,” says Brereton Diaz. “He wants to play the right way and all the boys have bought into his philosophy.

“His man-management is great, he’s always having chats with everyone and for me he’s been great for the club. It shows in how we play on the pitch.

“Training is always competitive. He was a top striker, too, so he sometimes shows me stuff I can work on. But he hasn’t quite got the boots on himself yet!

Brereton Diaz is pleased with how things have gone so far this campaign, but will be aware of how it can all unravel. Last season Blackburn were as high as second in February, but a disastrous run-in saw them miss out on the play-offs altogether under former boss Tony Mowbray.

He hopes things will be different this time around and they can last the course. A mid-season break may well help their relatively small squad to that extent.

“I’ve really enjoyed the start of the season,” he says. “We’re in the top six so we’ve got nothing to complain about, but I always want more. I’m happy with the goals I’ve scored so far but I definitely think for myself I still need to work on my hold-up play.

“I need to get more assists and create more chances. But I’m working hard in training and so I can hopefully put it all into play on a matchday.

“We’ve had more clean sheets. Defensively we’ve been good. If you get clean sheets you win games and that’s one thing we’ve really improved upon this season.

“When we score we’re winning games. We’re playing lovely football from the back and finishing it off with good play in the final third.

“We’ve had this break and a little recharge, now we’ve got to go again in the second half of the season. All the work will have been for nothing if we don’t keep it up.

“The second half of the season will be massive. We know what we’re working for.”

World champions and world record-breakers Sydney McLaughlin-Levrone and Mondo Duplantis have been named the World Athletes of the Year, from World Athletics

World champions and world record-breakers Sydney McLaughlin-Levrone and Mondo Duplantis have been named the World Athletes of the Year, from World Athletics