Olympic champion wins again ahead of an inspired Emile Cairess, as Karoline Grøvdal makes it a great day for Norway with a successful defence of her senior women’s crown

On a crisp morning at the European Cross Country Championships on the outskirts on Turin on Sunday (Dec 11) the message to his track rivals was clear as Jakob Ingebrigtsen strode to victory in the senior men’s race. The Norwegian is wintering well as he prepares for next summer’s season.

This was his sixth successive gold medal at these championships after four under-20 victories and, now, two senior wins. Striding away almost effortlessly on the final climb on the last lap, he won by nine seconds in 29:33.

Behind, Emile Cairess of Britain put up a fantastic challenge to take silver with the race of his life so far. Bronze went to Isaac Kimeli of Belgium with the big host nation hope, Yeman Crippa, not quite able to get on terms with the leading trio as he settled for fourth just ahead of Filimon Abraham of Germany.

Ingebrigtsen even had time to do a little show-boating on the final lap, which included a cheeky thumbs up to a camera in the short indoor section soon after he’d established his winning lead. When asked if he knew anything about his nearest challenger, Cairess, he answered with a blunt “no” as well.

But the straight-talking 22-year-old added: “Today was a good field with the best in Europe and it’s never easy.”

He says he set off conservatively and explained: “Most people went out too hard. From watching the junior races a lot of people faded and hit The Wall.”

Also setting off steadily was Cairess who, at one point, was sitting behind all of his GB team-mates in the race but later on he led the field, including Ingebrigtsen. “I set off well slow,” the Yorkshireman explained. “Last time at this event I blew up (60th in 2019) and so I wanted to make sure I finished well this time. I knew it’d be a tough course so I didn’t want to cross over that red line. I know when you go over it, it’s hard to go back.”

Cairess added: “I felt strong in the middle. Incredible, unbelievable. But the last lap I didn’t feel good! Maybe I’ll never get to his (Ingebrigtsen’s) level of winning the Olympics but I have big aspirations and am improving every year.”

Was his silver medal a surprise? “I was looking for a medal but I thought Ingebrigtsen and Crippa would be a class apart. I thought a bronze might be on the cards if everything went perfectly but it went better than perfectly as I came second.” 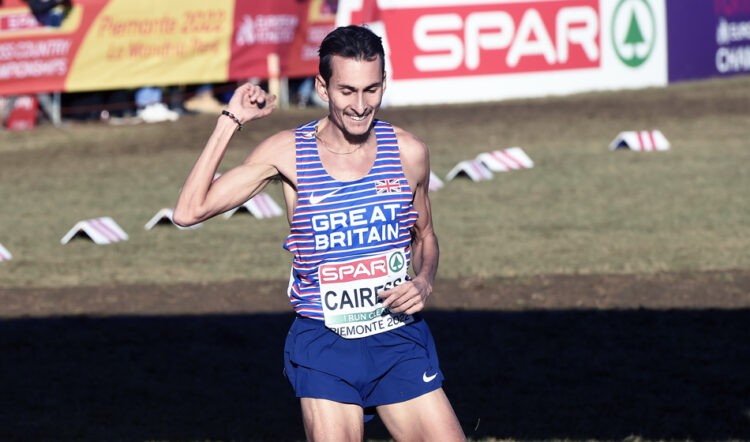 Cairess is likely to make his marathon debut in London in April. “I feel that’s where my future is and I’m looking forward to making a debut and having a career on the roads,” he says.

If he continues his improvement then Ingebrigtsen will be forced to start to take more notice of him. The Norwegian is renowned for his tunnel vision and focus, though. He says he may race indoors in the new year but will not travel to Australia for the World Cross Country Championships in February.

“If I’m going to perform in Budapest then going to Australia is too much,” he explains. “If the event was in Sandnes (his home) then maybe I would do it. I can’t risk putting that much into a race that’s not as important as Budapest.” 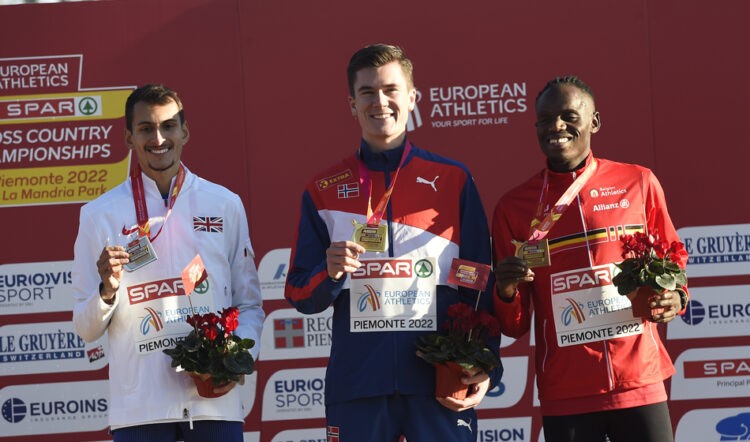 Behind Cairess the next Brit was Mahamed Mahamed. Buoyed by the silver medal-winning performance of his brother, Zak, in the earlier under-23 race, the 25-year-old placed 12th with team-mates Hugo Milner (32nd), Ellis Cross (37th), Ben Connor (42nd) and Jack Rowe (44th) completing the GB team as they finished sixth in a contest narrowly won by France from Italy and Spain.

Ingbrigtsen’s brothers, meanwhile, did not have a great day as Henrik, the under-23 champion in 2012, was 23rd while 2018 senior winner Filip dropped out. 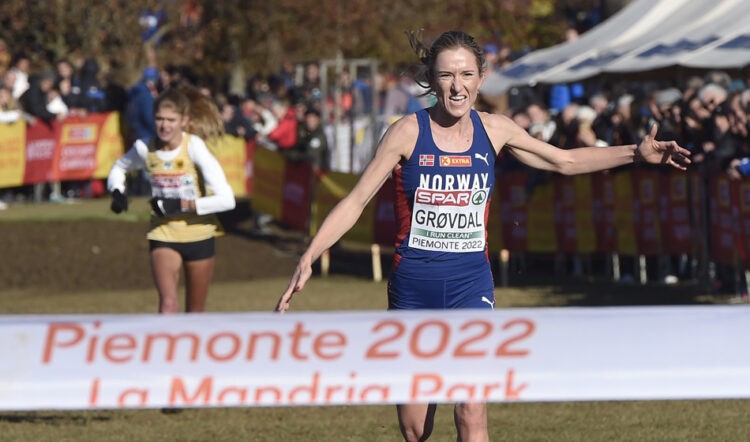 Another gold for Norway as Grøvdal successfully defends crown

With the kind of downhill racing ability that would make a top mountain runner envious, Karoline Bjerkeli Grøvdal, sped away from Konstanze Klosterhalfen to win the senior women’s crown for the second year on the trot by four seconds in 26:25.

It means the Norwegian athlete has become the most successful female athlete in the history of the championships as she took her ninth medal and third gold following under-20 success in 2009 and senior victory in 2021.

“I knew I had to give it all when going down,” said Grøvdal, “and that was what I did. I used to be a track runner, but I know that I am strong in the cross – especially after winning last year, so the technical part is good for me. I felt quite strong going up the hill and I think that is the reason I took the gold here.”

The race unfolded into a three-way shoot-out between Grøvdal, the European 5000m champion Klosterhalfen and former Euro Cross winner Yasemin Can of Turkey. But Can blew up spectacularly during the race and was even reduced to walking up one of the savage climbs.

She later dropped out as former under-23 champion Alina Reh finished strongly to win a close battle for third ahead of fellow German Hanna Klein as Selamawit Teferi of Israel, in fifth, and Miriam Dattke of Germany, in sixth, were close behind. 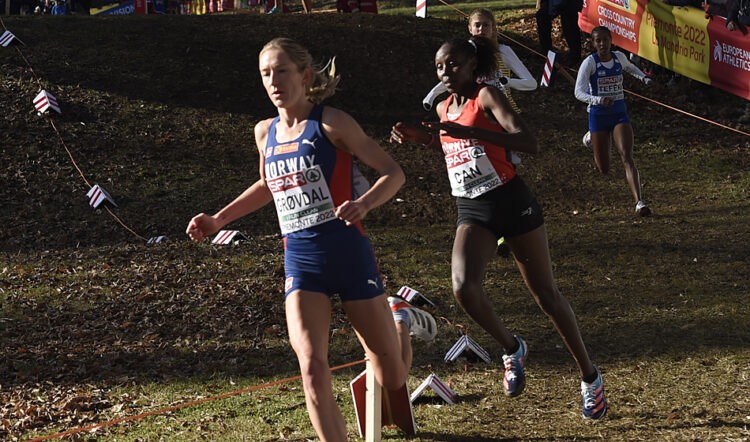 Leading Brit was Jess Warner-Judd as she finished one place and one second ahead of Abbie Donnelly in eighth and ninth respectively. Warner-Judd was not a fan of the hilly course and said: “I went for it and put myself out there and couldn’t have done anymore as I literally fell over the line.

“The indoor section was the nicest bit as it was flat and I could get my breath back. I’m rubbish at running downhill and I’m not good at running on the mud or short, sharp hills!” added Warner-Judd, whose next big race is the Houston Half-Marathon in January. 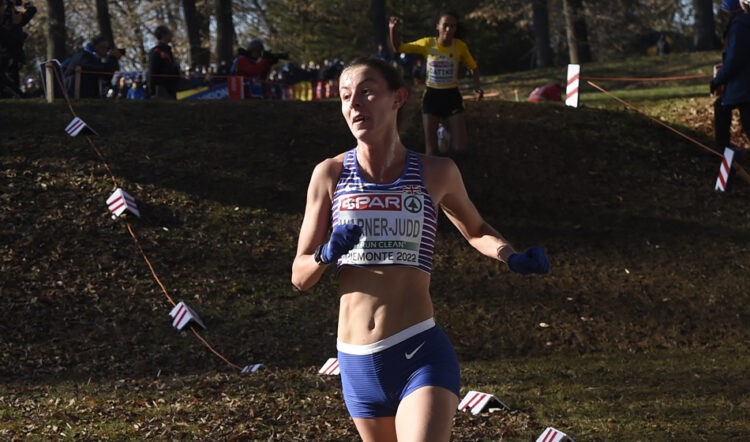 Donnelly, though, was happier with her run – relishing the hills – and said: “My parents and partner all flew over to watch and I saw them running around like lunatics trying to cheer me on!”

With Poppy Tank in 13th and Jess Gibbon in 14th it meant Britain won the team silver behind Germany with Ireland – who were led by Eilish and Roisin Flanagan in 11th and 12th – taking bronze.

The mixed relay often produces dramatic action with multiple changes of position. The 2022 edition was no exception as Gaia Sabbatini uncorked an inspired finish to anchor Italy to victory ahead of Spain and France.

Sabbatini, the reigning European under-23 1500m champion, charged past Rosalia Tarraga in the final metres to take gold in the 4x1500m event, much to the delight of the partisan crowd.

Italy were always in the mix with Pietro Arese running a superb first leg before handing to Federica Del Buono and Yassin Bouih. 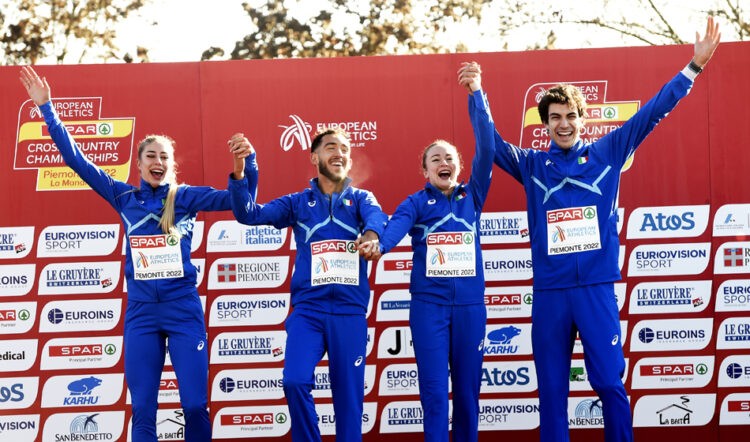 Sabbatini lost the lead on the final stage before dramatically regaining it to win in 13:23 – one second ahead of Spain.

“I felt very responsible to bring this team to the finish line in the best position and it was very hard. The public was just amazing and it helped us a lot,” said Sabbatini.

Defending champions Great Britain finished fifth but it was a good chance to give some international experience to the developing Khai Mhlanga, Callum Elson and James Heneghan, whereas it was great to see Olympic 1500m runner Revee Walcott-Nolan back in action after missing the track season due to long Covid and a stress response in her leg.

Walcott-Nolan plans to give 3000m a crack in the new year and the strength she has shown in short-course cross-country bodes well.

Reports and photos from the under-20 races, CLICK HERE