Gareth Southgate intends to stay on as England manager until the conclusion of the 2024 European Championships.

Sky Sports News has confirmed newspaper reports that Southgate is “convinced” he should stay on and will inform the FA of his decision before Christmas.

Southgate told bosses at the FA he needed time to consider his future after England bowed out of the World Cup at the quarter-final stage to reigning champions France.

“These tournaments take a lot out of you,” Southgate said after England’s exit, “we’ve done that after every tournament and that’s the right thing to do. I don’t want to be four, five months down the line thinking I’ve made the wrong call. It’s too important for everybody to get that wrong.”

After conversations with his family, it is understood Southgate is convinced he should remain in charge of England, and will see out his contract until the conclusion of the European Championship in Germany in 2024.

Since taking charge in 2016, Southgate guided England to the semi-finals of the 2018 World Cup and the final of Euro 2020 before reaching the last eight at Qatar 2022.

‘No obvious successor to Southgate’

“If Southgate left now, it would leave the FA in a very difficult position.

“Their next game is in March against Italy in Naples, an incredibly difficult game that could define England’s qualification for Euro 2024. That’s why they needed a decision from Southgate pretty quickly. They weren’t going to put pressure on him, they were going give him the time to make his own mind up.

“It’s good news for the England players who I think will be very relieved. The vast majority of them, if not all of them, wanted him to stay on due to the atmosphere he’s created within the group and the success he’s helped engender on the pitch.

“What’s been very clear to the FA is there is no obvious successor to Southgate, that’s partly why they are so desperate for him to stay on, and partly because he’s done a very good job taking England to a World Cup semi-final, quarter-final and a Euros final.

He’s very much an FA man, he understands, works and thrives within the structure. There is no obvious successor. By committing to England, Southgate gives the FA time to finalise those succession plans.”

Neville: Southgate should stay on 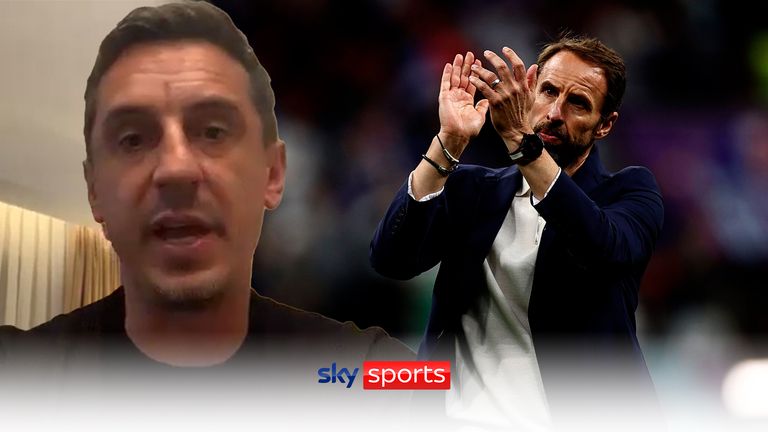 “I look at him and think there’s no English person alive who has got more experience at major tournaments, junior tournaments and playing for his country. He has seen it all and I think he should be kept within the system to design the future.

“He has been there for 10 years, we’ve had great success with the women’s teams, with the younger teams, and I think we’ve had really good success with the men’s team, and I feel like he has seen that improvement in performance and culture over 10 years. I would like him to stay with the FA beyond his coaching role.

“I remember England getting rid of Bobby Robson in 1990. I remember us getting rid of Terry Venables in 1996. It didn’t go particularly well straight after those tournaments and I think Gareth is doing a very good job and one more tournament for me feels right.

“Gareth is an honest man with great integrity who will make the decision that is right for him and the FA. It feels to me like 18 months is right and Gareth doing this next tournament, maybe knowing there’s a succession plan in place, would feel right to me.”