Far from being content to white-label the same products and ingredients as so many others do in the industry, the visionaries at MuscleTech like to surf on the cutting edge.

Back in August, we wrote about the release of MuscleTech’s iQ Series. Comprised of EuphoriQ, Burn iQ Smart Thermo Powder, and Burn iQ Smart Thermo Capsules, the series took stimulant-based pre-workouts into a new era, thanks to a caffeine replacement known as enfinity, made from paraxanthine.

Now they’re back with some more cyberpunk technology, but in this case, it is meant to be taken visually instead of orally:

MuscleTech has released a complete augmented reality (AR) experience, allowing users to learn about their formulas, access free workouts, and more in an interactive, futuristic experience. It’s as cool as it is informative.

Below, we dig into the newly-released AR experience, and then do a quick rundown of the iQ Series and what makes it so unique. First, let’s take a look at PricePlow for some MuscleTech deals:

The Next Step: Augmented Reality? 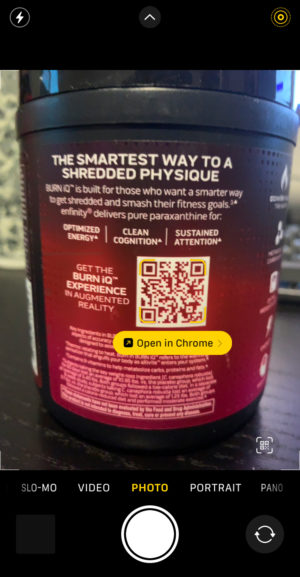 At the store and see a tub of MuscleTech Burn iQ or EuphoriQ? Point you camera at it and let’s go!

Supplement companies aren’t generally known for their participation in the frontiers of digital innovation. That said, MuscleTech had the gall to dethrone caffeine as stimulant prime, so it only makes sense that they’d take another leap into the future: MuscleTech’s iQ Series now supports augmented reality.

What is augmented reality?

Whereas virtual reality (VR) creates a fully simulated digital environment, AR melds the two together to create a hybrid experience. AR is, of course, a relatively young technology, but some companies are beginning to tinker around with it for everything from full AR games to content delivery.

Here’s how it works: there’s a QR code on each tub of EuphoriQ and BurniQ, as well as on the MuscleTech website. On your phone, scan that code, and you will be redirected to a new site.

It’ll take a second to load, probably due to it being super fancy and high-tech. Once it does, it’ll ask you for camera access. Tap yes, and this is when the fun begins. 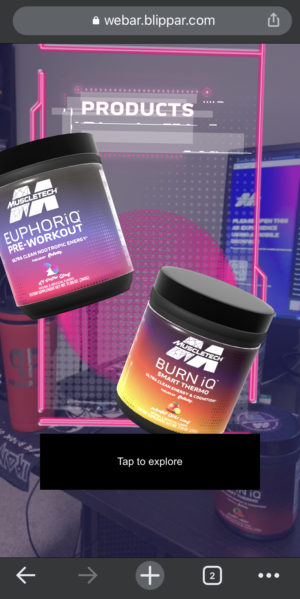 The product explorer is where we went first – these screenshots show Burn iQ, but you can also learn about EuphoriQ

Your screen will display your camera’s view of what’s in front of you like normal, but overlaid on top will be a menu. The way the perspective changes on the menu as you tilt and move your phone feels pretty trippy for anyone who’s never used this tech before.

There are four menu items:

You can tap your screen to run through each option, bringing up new graphics and screens. Spin the tubs around in the Products section to look at ingredients, benefits, and more. Tap the Workouts section to browse some free workout routines. Get access to a sweet discount on MuscleTech products in the Discounts section.

Try it out – this is really cool and we can see it as the future of product education!

Instead of falling back on good ol’ caffeine, MuscleTech used enfinity as the backbone of their iQ formulas. Enfinity is a pure form of paraxanthine, and it’s probably the biggest thing to happen in the pre-workout space since… well, caffeine. 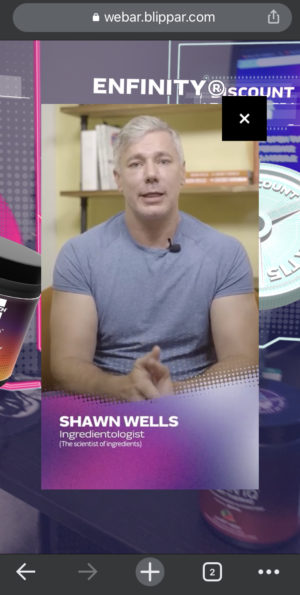 Hey, it’s Shawn Wells, the creator of enfinity – He and MuscleTech’s Raza Bashir joined the PricePlow Podcast for Episode #072 to talk about this launch and why it’s so great ot use enfinity Paraxanthine instead of caffeine!

When caffeine is metabolized in the liver, it leads to three metabolites: paraxanthine, theobromine and theophylline. As such, all three have similar effects on the body as caffeine: with increased alertness and improved cognitive function being the two primary benefits.

As caffeine’s most potent metabolite, paraxanthine mimics the familiar energizing effects. However, it has a shorter half-life than caffeine, clocking in at just 3.7 hours instead of caffeine’s general half-life of 4.1 hours.

Paraxanthine has been shown to be a potent fat-burning agent, as well as adenosine antagonist. Paraxanthine is the primary source of the dopamine upregulation experienced with caffeine. This is the metabolite whose effects we’re really most interested in.

Why take paraxanthine over caffeine?

The other two metabolites of caffeine – theobromine and theophylline – have significantly longer half-lives than paraxanthine. This leads to many of the classic side effects of caffeine: from sleep disruption and that anxious, jittery feeling so familiar with caffeine consumption.

Paraxanthine appears to route around those side effects and provide solid, smooth energy.

Want to learn more? Listen to Raza Bashir of MuscleTech and Shawn Wells of ING2 in PricePlow Podcast #072, an episode where Shawn explains the nitty-gritty and we talk about how much cleaner of an experience this is!

Currently, the three formulas that compose MuscleTech’s iQ series are EuphoriQ Pre-Workout and Burn iQ Smart Thermo – which comes in drink powder and capsule variations. Here’s a summary of the ingredients: 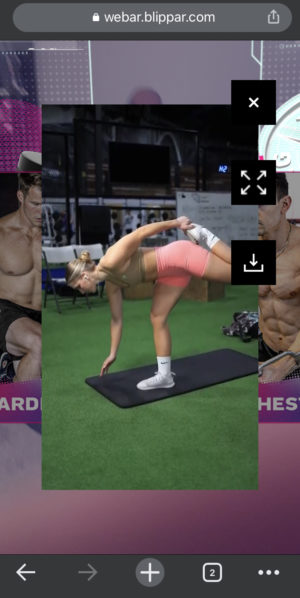 Phrases like “AI” or “augmented reality” carry a lot of baggage with them, both good and bad. On the one hand, we are in awe of the advancements in digital technology over such a relatively short period. We get futuristic images of the The Jetsons or Star Trek stirring around in our minds.

On the other hand are the somewhat frightening implications of some technology pushed towards us. Most of us grew up watching movies like The Terminator or The Matrix, in which humanity was engulfed by their own technological creations, forced to live under an oppressive artificially intelligent overlord or in a simulated environment entirely.

What we like about AR is that it’s opt-in — you choose to point your camera at the product’s QR code and to send it to the browser — and it gives us a chance for more education, which is ultimately our goal at PricePlow. All the better if the education is localized at the product itself.

The risks of finding ourselves in the dystopian virtual reality world depicted in the Matrix aside, this application of augmented reality by a supplement company is creative and fun. It’s a great way to convey information, and we could see it becoming a potent content-delivery system. Who knows, maybe one day you’ll see some awesome PricePlow content pop up over top of your kitchen table as you mix yourself a protein shake.