Putting a spring in your step

Plyometric exercises can benefit all athletes, but how do you pick the best ones for you and what’s the science behind them?

Plyometric drills such as drop jumps, hops and bounds capitalise on the stretch-reflex capacity of our muscles and other soft tissue.

When an athlete lands from a jump and prepares to leap back upwards or forwards, the muscles of the ankle, knee and hip will perform what’s known as an eccentric muscular lengthening action. They then shorten whilst performing the reactive concentric muscular action to power the athlete up and/or forwards.

This is a largely involuntary, or non-volitional, process (making it different from weight training) and a natural consequence of our body’s soft tissue architecture.

However, this stretch-reflex response can be improved upon. Sports science shows how repeated plyometric training can increase power output, speed of muscular action and increase leg stiffness. It can improve maximal strength, too (ie, the ability to lift weights will get better).

Much of the science behind plyometrics dates back to Soviet era coaching and the work of Yuri Verkhoshansky. Indeed, much of his work goes under the header “Shock Method” – the shock being the impact and the reaction produced as a consequence of plyometrics.

Leg stiffness underpins physiological adaptation to plyometric training. Simply put, the greater the stiffness around the ankle, hip and knee joints, the more reactive and more powerful the energy return will be.

Although there are some specific ways to physiologically measure leg stiffness improvement, simple hopping tests can be used, as long as the performer is suitably conditioned in the first place.

Timing hops over 20m, for example, and counting the number completed can be a good test of leg stiffness. Those with superior stiffness will take less time and use fewer hops. Such a test would apply to athletes from all disciplines.

As Andy Kay wrote in the October issue of AW, greater leg stiffness for middle and longer distance runners will see their performance economy improved. Basically, these athletes will be able to run at race pace and below with greater economy.

Sports scientists who reviewed various strength training methods, which included plyometric training, identified this and have even discovered that the fastest 10,000m runners over 20m will usually be the fastest over race distance.

Sprinters, jumpers, thowers and vaulters are obviously candidates for plyometric training and it’s these athletes who potentially have the largest arsenal of plyometric drills from which to choose.

As a long and triple jump and sprints coach, I’m all too aware of this choice and knowing which exercises to select can therefore lead to confusion. So how can we make this choice simpler?

Let’s start by considering ground contact times. If we work with this, then we can more clearly identify and classify plyometric exercises for training transference purposes.

In terms of plyometrics, depth jumps from a height of 40cm have a 0.200 millisecond ground contact time, while bounding contacts are 0.174 milliseconds.

The fastest a volitional weight training exercise can be performed is around 500 milliseconds – and we’ve all seen longer when an athlete is grinding out a PB bench press, for example.

So, plyometric drills much more closely replicate what happens across all athletic disciplines compared to weights.

We thus get potential for greater transference given that transfer of training depends on specificity of movement, muscle recruitment and speed of ground contact and limb speed.

It would be of little specific value in terms of transference to utilise consistently slow conditioning movements and this does include plyometric drills which have significantly slower event-specific ground contact values.

If you were do this, then adaptation would – particularly for the training mature athlete – be compromised. It would be akin to giving a sprinter a training programme where they only sprinted at 90 per cent of maximum speed. With consistent, relevant stimuli, the athlete’s mind, muscles and central nervous system will adapt.

Indeed, the science behind plyometrics has indicated how drop height for a depth jump can optimise motor neuron recruitment – that’s to say a mechanical, muscular response. 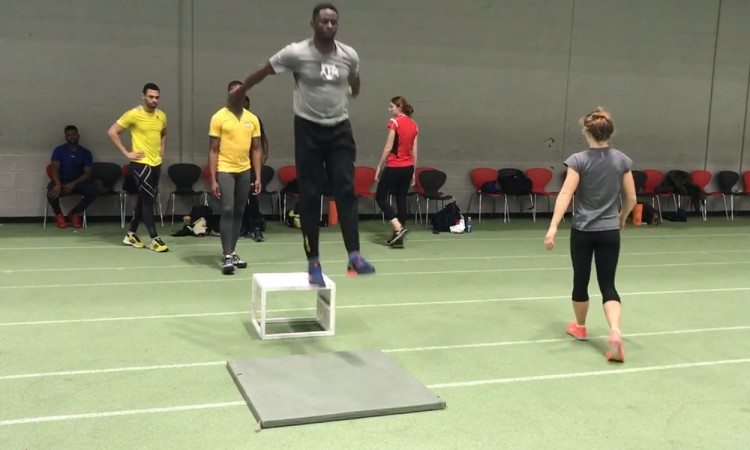 You can manipulate different ground contact time plyometrics into a progressive training plan. How? Let’s look at sprinting as an example.

Sprint acceleration uses slower ground contacts when the sprinter leaves the blocks and gets up to speed compared to when sprinting at maximum velocity. It is therefore possible to use different plyometrics to train for different parts of the 100m sprint, for example.

Exercises for the acceleration phase would include jump squats, holding weights at arms’ length. The additional load would slow the rate of force production, yet bring about ground contact times relevant to acceleration.

Quicker plyometrics such as speed bounds and hops would then be used to improve maximum velocity. A lot of sports science shows this to be the case.

How to measure reactivity

There are apps which can use connected accelerometers to measure what’s known as a reactive strength index (RSI) – basically, these record the air time and height gained from jumps, such as a standing vertical jump/countermovement jump, drop jump or similar. They then use a calculation to measure the RSI. It can also be measured using a force plate while measuring height achieved/time in air and a resultant calculation.

However RSI is calculated – and as long as the same protocols are used – knowing the score can lead to a degree of performance tracking and plyometric improvement.

Coffee with Larry, for Wednesday, December 21, 2022, Learning from Observation

The Best Chest And Triceps Workout To Build

The Best Chest And Triceps Workout To Build