Story of Dorando Pietri and the 1908 Olympic Marathon

In an extract from his new book, Roger Robinson looks at the Olympic drama which unfolded in London 114 years ago and turned the marathon into a global phenomenon

The most dramatic, horrific and important marathon in history took place in London on July 24, 1908. That hot day, a courageous Italian cake-maker and a cool Irish-American construction worker transformed the event forever.

The crowd of 100,000 people watched for one man. Who would he be? Their only information had come from names chalked on a big board which was paraded around the field. A sudden gunshot hushed them, for a shouted announcement through a long megaphone: “The runners are in sight!” No names were given. The crowd watched the top of the ramp where the first runner would appear into the stadium at White City. South African Charles Hefferon had been four minutes ahead in the last report from the leaderboard.

When you’re waiting for the marathon leader, nothing is certain, especially on a hot and humid day. There was a scurry of action on the sloping ramp. Officials and police shouted or pointed. Among them, the crowd glimpsed a small dark man with a white kerchief knotted on his head, in a sodden white shirt and baggy red shorts. He seemed unsure of where to go. Stumbling on to the cinder track, he tottered jerkily, like a marionette.

He was Dorando Pietri of Italy. What happened to him in the next few minutes has become inseparable from the story of the marathon and of the Olympic Games.

The crowd had hoped for Hefferon. The British runners who led (much too fast) for the first 10 miles had all faded. The pre-race favourite, indigenous Canadian Tom Longboat, stopped after a surge at 16 miles. Hefferon, born in Newbury, Berkshire, and representing South Africa, the new addition to the British Empire, was almost as good as a Briton. Far better, most of the crowd thought, than any of the 12 Americans, whose team had won so many events and so few friends in those conflict-ridden Games. That partisan context would affect how some key people acted in the next minutes.

The crowd watching Pietri were moved by something deeper than partisanship. Arthur Conan Doyle (creator of Sherlock Holmes) said it best, covering the race for the Daily Mail: “He has gone to the extreme of human endurance… It is horrible, and yet fascinating, this struggle between a set purpose and an utterly exhausted frame.”

Pietri, dazed and bewildered, staggered forward. Weaving and stumbling, he covered 20 yards, and then his legs crumpled, and he fell. He was directly in front of a huge, packed stand and the people gasped. Some thought he had died.

We are familiar now with heat-exhaustion – Jim Peters in 1954, Gabriela Andersen-Schiess 1984, Callum Hawkins, Jessica Judd – and it is still heart-wrenching. In 1908, these people were seeing it for the first time. Potential tragedy was being enacted right in front of them.

Helped to his feet, Pietri tottered along the rest of the long straight, “the little red legs going incoherently, driven by a supreme will within,” wrote Doyle. As he reached the curve, legs sagging, the crowd groaned in pity and terror as he fell again. Again, they thought he was dying. But again, after much attention, he was up. He covered only a few yards before crumpling yet again at the top of the bend.

Twice more he collapsed. A photograph shows him lying on his back, inert, supported in the arms of medical officer Dr Bulger. Pietri seems to have passed out.

And now things became really exciting. The next runner appeared, with the striped shield of the USA on his white shirt. It was Johnny Hayes, a New Yorker of Irish parentage and he was charging, with a sure stride. It is a crucial part of the story of this extraordinary day that Hayes ran a perfectly judged race when everyone else was going bananas.

Hayes ran down the ramp “gallantly” (in Doyle’s word), and began the final pursuit.

How did Pietri ever reach the finish? With plenty of help, for sure, even to stay upright. He got there as Hayes was on the final bend, a mere 150 yards behind. The famous finish line photo shows Pietri with liquid legs and glazed expression. Race director Jack Andrew is helping him through the tape, with a good grip on Pietri’s right upper arm, holding a huge megaphone in the other hand.

The place must have been bedlam. The crowd was screaming. Hayes was running at six-minute-mile pace. The only communication was by bellowing into a giant megaphone. Now we all know that if you give assistance, the runner must be disqualified. But we know it because of what happened in London that day.

Through his megaphone, Andrew promptly announced Pietri the winner. The courageous little Italian was the briefest champion in Olympic marathon history. The American team immediately lodged a protest, which inevitably was upheld. Johnny Hayes, who alone among the potential winners seemed to understand that a marathon is longer than 18 miles, was the worthy winner. 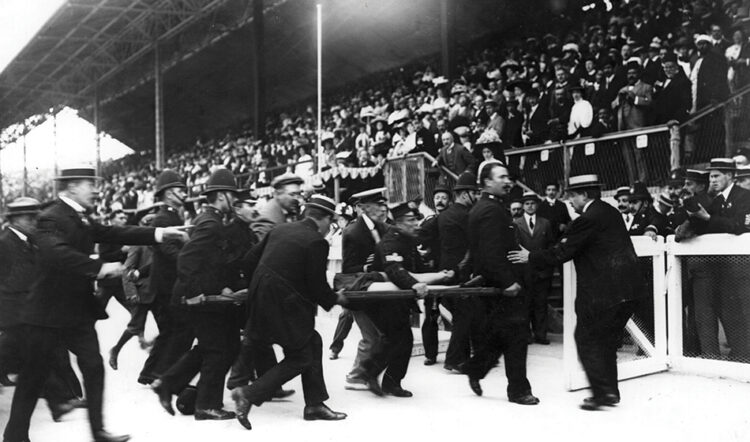 Dorando Pietri on a stretcher

Getting the story right

The 1908 Olympic marathon is responsible for a number of errors and confusions which have gone into folklore over the years. Roger Robinson sets the record straight on a selection of them here:

The course: Started within the grounds of Windsor Castle, by special royal permission. After 700 yards it joined the course which had been used three months earlier for the British trial, which started outside the Castle grounds, on the Long Walk.

The start: The royal children did not watch with noses pressed to the nursery windows, as is usually claimed. A photo shows four of them, outside on the sloping lawn, getting a close view as the runners walk to the start. Detailed research by Mike Sandford of Southern AAA has established that the start was on the East Terrace, not under the nursery window.

The distance: The Olympic Games rules said “about 40 kilometres”, but the Polytechnic club, who organised the London race, added two kilometres, confessing to that change only two days beforehand. The course measurer’s report said the distance from the East Terrace “will be about 26 miles to the edge of the stadium track”. Don’t mention that word “about” to Eliud Kipchoge.

The track: In defiance of the Olympic (French-dominated) commitment to metric distances, the British added events like a three miles team race and built the White City as a vast arena of three laps to the mile. Half a lap to the finish line was therefore 385 yards.

The direction: The competitors’ instructions said all track races were left-hand inside. Pietri had run the three miles team race. Without mention in the instructions, the last half-lap of the marathon went the other way. No wonder he looked confused.

The finish: Was the same for all track races. The royal seats were accordingly there. It wasn’t Queen Alexandra’s fault (as is often claimed) that you have to do those 385 yards at the end of your next marathon.

Arthur Conan Doyle: Most accounts claim wrongly that he was one of the officials who assisted Pietri. In fact, he was in the stands, working on an outstanding piece of sports reporting for The Daily Mail. A new literary discovery is that Doyle was also working on a Sherlock Holmes story, and paid tribute to Dorando Pietri in the name of a heroic character.

What happened next? Pietri and Hayes had an offer they could not refuse to race marathons for big prize money, indoors (262 laps) in New York. Longboat and England’s Alf Shrubb soon joined them. And so began another great story, the forgotten one of the years when marathon mania was spectacular American show business.

Running Throughout Time: the Greatest Running Stories Ever Told (Meyer & Meyer) by Roger Robinson is out now

» This article first appeared in the October issue of AW magazine. Subscribe here

Does Under Eating Cause Bloating

Does Under Eating Cause Bloating