The 36-year-old has been involved in a long-standing contract dispute with the promoter, who have also waived their exclusivity clauses to allow Ngannou to negotiate with other organisations without interference.

Ngannou had been expected to appear in UFC 285 in Las Vegas on March 4, although him becoming a free agent means that Jon Jones will face France’s Ciryl Gane instead on the same date.

“We’ve been negotiating with [Ngannou] for more than two years,” White said. “We offered Francis a deal that would’ve made him the highest paid heavyweight in the history of the company – more than [Brock] Lesnar, more than anybody, and he turned the deal down.

“Francis is in a place now where he doesn’t want to take a lot of risk. He feels like he’s in a position where he could fight lesser opponents and make more money, so we’re going to let him do that and release him from our contract. He can go wherever he wants and do whatever he wants.”

Ngannou was on a six-fight winning streak prior to becoming a free agent, most recently unifying the heavyweight division when he defeated Gane by unanimous decision last January before undergoing knee surgery.

Jones will return to action for the first time since February 2020, with the 35-year-old making his heavyweight debut after previously holding a dominant record at light-heavyweight (26-1).

Gane held the interim heavyweight championship until he was beaten by Ngannou last January, then claimed a third-round knockout over Tai Tuivasa at UFC Fight Night 209 in September.

White: ‘No excuses’ for slapping wife

Dana White thinks he will not be punished by the UFC for slapping his wife at a nightclub in New Mexico on New Year’s Eve. 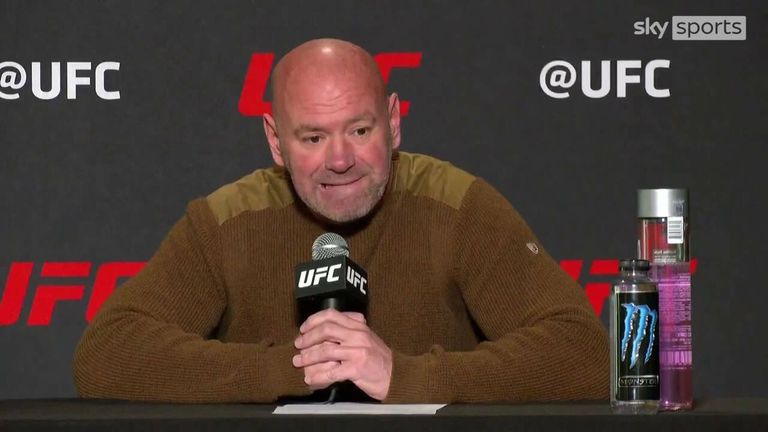 Dana White says he deserves all the criticism he’s received after a video emerged showing him slapping his wife, Anne, on New Year’s Eve.

The UFC president issued an apology earlier in January after a video emerged of an altercation involving him and his wife Anne.

“What should the repercussions be? You tell me,” White said last week. “I take 30 days off? How does that hurt me? Me leaving hurts the company, hurts my employees, hurts the fighters. It doesn’t hurt me. What is my punishment? Here’s my punishment: I have to walk around for however long I live and this is how I’m labelled now.

“It was obviously a horrible personal experience. And, you know, there’s no excuses for it. It’s something that I’m gonna have to deal with and live with for the rest of my life.”