Yalemzerf Yehualaw ran a sizzling 29:19 at the Valencia 10km on Sunday (Jan 15) to miss her world record by five seconds as Weldon Kipkirui Langat took the men’s race in 26:55.

Behind, though, there was chaos at the start as runners fell and then scrambled over each other in an early-race pile-up.

The incident was caused, it is believed, by sub-31min competitors being brought to the start line while faster elite athletes were still warming up. When the elites then arrived, the sub-31min runners were pushed back, leading to a bottleneck of runners in a narrow and congested starting area.

More on the start line chaos at the Valencia 10km. https://t.co/chXBKQl2WJ

It only took one runner to tumble and then others went down like skittles. Up ahead, though, Kipkirui Langat stormed to a narrow victory ahead of fellow Kenyans Charles Kipkirui (26:57) and Daniel Tumaka (27:01) with world 5000m silver medallist Jacob Krop fourth in 27:04.

Nevertheless it was the second fastest time in history from an athlete who is aiming to defend her London Marathon title in April.

Kenyans Jesca Chelangat and Esther Birundu were second and third in 30:01 and 30:15. 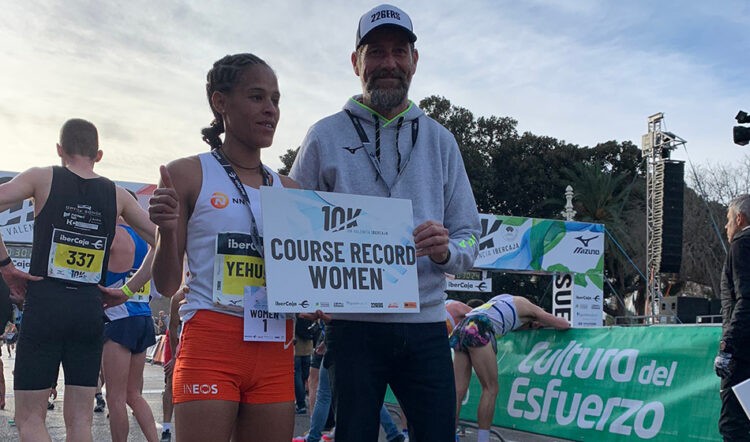 Samantha Harrison proved the pick of a large group of Brits in Valencia as she sliced 19 seconds off her PB to run 30:51 in fifth place.

It moves her up to No.4 on the UK all-time rankings, leapfrogging Jess Warner-Judd, who coincidentally races on the same day in Houston.

Further behind, Ellis Cross and Calum Johnson clocked 28:52, Alexander Lepretre 28:53, Phil Sesemann 28:56 and Ian Crowe-Wright 29:02. However, it is not known how much the start line melee affected the Brits.